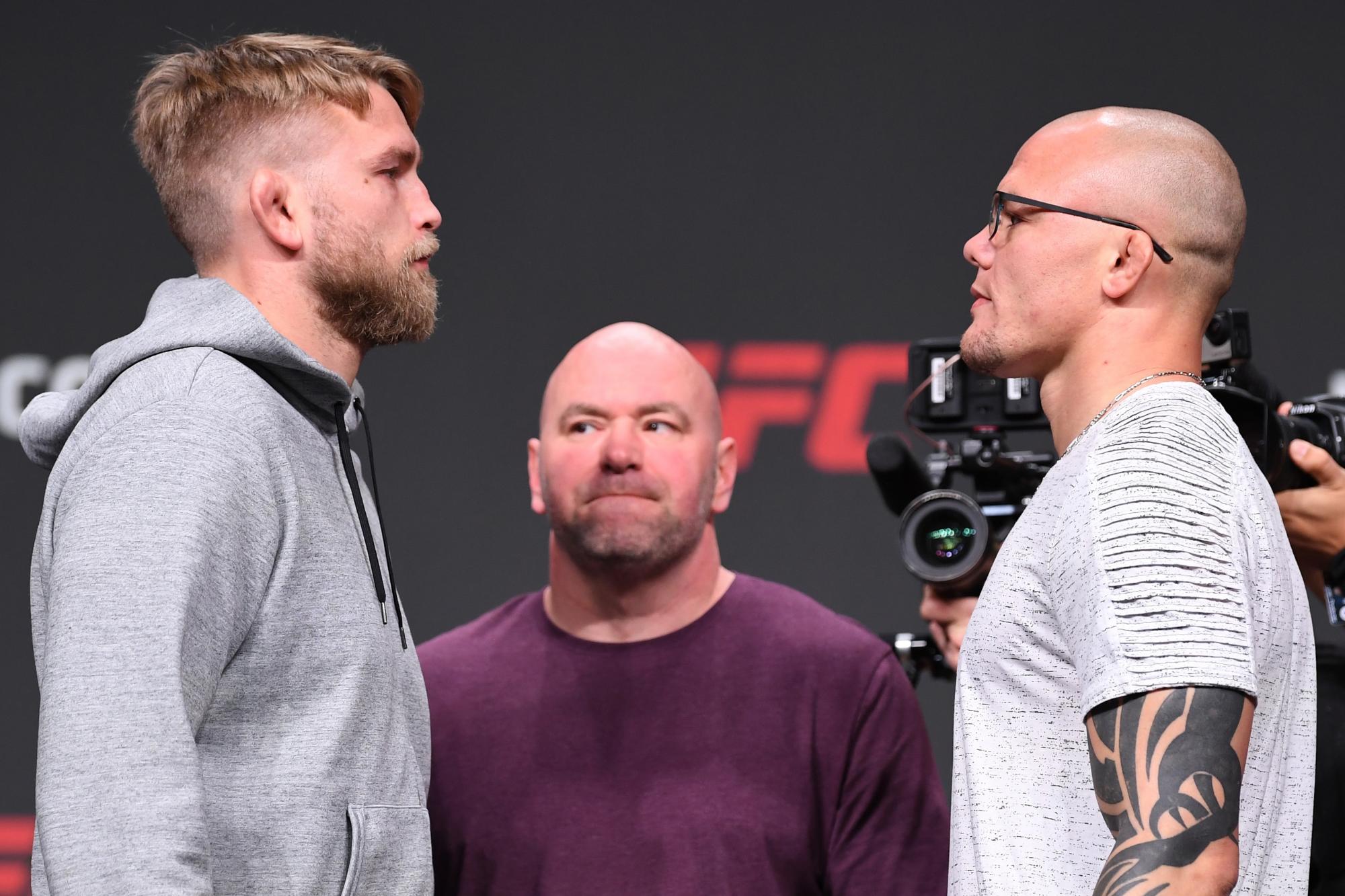 Take a deep dive into UFC Stockholm with this fight by fight preview
By Damon Martin • May. 28, 2019

ALEXANDER GUSTAFSSON VS. ANTHONY SMITH
A pair of light heavyweight title contenders will clash in the main event in Stockholm, Sweden, as Alexander Gustafsson and Anthony Smith both look to bounce back from recent losses to reigning champion Jon Jones. Prior to his setback against Jones this past December, Gustafsson had rattled off back-to-back wins against Jan Blachowicz and Glover Teixeira, with the latter being one of his most impressive performances since joining the UFC roster. Gustafsson remains arguably the second-best fighter in the world at 205 pounds, but if he ever hopes to get back to title contention, he has to stave off the rest of the challengers to the throne. Smith would love nothing more than to cement his place in the rankings by knocking off Gustafsson this weekend. The Nebraska native came up short in his bid to beat Jones, but he was unblemished at light heavyweight before that fight. Smith won three fights in a row after moving to 205 pounds, finishing each of those victories. Smith would love to add Gustafsson to his win column but he’s also stepping into the lion’s den by taking on “The Mauler” in his own backyard of Sweden. With the light heavyweight division always thirsty for title challengers, Gustafsson and Smith will do everything possible to remain at the top of that list with a win on Saturday.

ILIR LATIFI VS. VOLKAN OEZDEMIR
The light heavyweight division will take center stage in the co-main event as well, as local favorite Ilir Latifi takes on former title challenger Volkan Oezdemir. Latifi came up short in his last fight against Corey Anderson, which put a stop to his two bout win streak that included an impressive submission victory against Ovince Saint Preux. Overall, Latifi has gone 5-2 in his past seven fights while constantly threatening the top fighters in the division. As for Oezdemir, he stormed through his first three opponents in the UFC to earn a title shot and has since dropped his last three fights in a row. The last one was a heartbreaking split decision against Dominick Reyes, so there is little doubt that Oezdemir is going to do everything possible to get back on track when he faces Latifi this weekend.

JIMI MANUWA VS. ALEKSANDAR RAKIC
British slugger Jimi Manuwa has lived by the sword or died by the sword in his past six fights while going to war with some of the best fighters in the world at 205 pounds. While he’s managed to earn knockouts against fighters such as Corey Anderson and Ovince Saint Preux, Manuwa is now coming off three losses in a row, including a knockout suffered to current top-ranked light heavyweight title contender Thiago Santos. If Manuwa hopes to stave off a fourth consecutive defeat he’ll have to stop Aleksandar Rakic, who comes into the fight with an unblemished record in the UFC with three straight wins, including a TKO against Devin Clark in his last outing. This is undoubtedly Rakic’s toughest test to date, but if he can get past Manuwa, he immediately becomes a threat to anybody in the top 10.

MAKWAN AMIRKHANI VS. CHRIS FISHGOLD
Makwan Amirkhani prides himself on always delivering entertaining fights, and after a back and forth battle in his last outing he will look to win two in a row as he faces Chris Fishgold in Sweden. At his best, Amirkhani is a dynamic fighter with heavy hands and a suffocating grappling game. He has pulled off highlight reel knockouts and nasty submissions, but he’ll have to be at the top of his game against Fishgold, who is still brimming with confidence after earning his first UFC win in February. While Fishgold came up short in his debut, the British fighter has only suffered that one defeat in his career to surging featherweight contender Calvin Kattar. Now fresh off a submission win his last fight, Fishgold will look to pull off the upset against Amirkhani, who will be fighting close to home with his native Finland not far away.

DAMIR HADZOVIC VS. CHRISTOS GIAGOS
Fresh off two straight wins, Damir Hadzovic would love to make it three in a row when he faces Christos Giagos, who comes into the fight off a unanimous decision victory in his last bout as well. Hadzovic struggled to find his footing during the early part of his UFC career, but since that time he’s picked up wins over Nick Hein and a TKO against Marco Polo Reyes. Hadzovic has all the skills to make noise at 155 pounds but Giagos isn’t going to just roll over and play dead after he began building momentum with a win in his last fight after making his return to the UFC in 2018 following a two-year absence from the Octagon.

DANIEL TEYMUR VS. SUNG BIN JO
Sweden’s own Daniel Teymur has put on some exciting performances since arriving in the UFC, but he’s failed to get a win after tasting three straight defeats in a row. There may be no better place for Teymur to make a stand than in his home country as he faces off with UFC newcomer Sung Bin Jo, who comes into the fight with an undefeated 9-0 record with finishes in all nine of his professional wins. Sung Bin is well rounded fighter with a mix of knockouts and submissions on his resume, but this will not be an easy debut as he steps into enemy territory to face Teymur in the opening bout of the main card.

TONYA EVINGER VS. LINA LANSBERG
Former Invicta FC champion Tonya Evinger will attempt to get her first UFC win as she faces Lina Lansberg in bantamweight action this weekend. Evinger may have come up short in a pair of fights against Cris Cyborg and Aspen Ladd, but those losses haven’t shown her true potential. Evinger is a dangerous fighter with high-level grappling and a relentless pace that will break many of her opponents.  In fact, she holds wins over a pair of UFC veterans in Yana Kutitskaya and Irene Aldana, but to get her first victory in the UFC she’ll have to beat Lansberg, who has bounced back and forth between wins and losses through her first five fights inside the Octagon. Lansberg is no slouch and she will enjoy having the home audience on her side in this featured preliminary battle.

STEVIE RAY VS. LEONARDO SANTOS
Octagon veteran Stevie Ray got back in the win column with his last performance this past October and now he’ll look to make it two in a row as he faces off with submission specialist Leonardo Santos, who makes his return to action for the first time in more than two years. Prior to a long layoff due to injury, Santos was making waves at lightweight, including a TKO against former interim title challenger Kevin Lee. Now Santos will attempt to jumpstart his career in his return to action as he faces a battle-tested veteran in Ray this weekend.

NICK HEIN VS. FRANK CAMACHO
A potential show stealer on the prelims takes place in the lightweight division as Germany’s own Nick Hein takes on Frank Camacho, who has earned three Fight of the Night awards since joining the UFC roster. Win, lose or draw, Camacho is always coming to fight and he puts everything on the line each time he steps into that Octagon. Unfortunately, after suffering two losses in a row, Camacho knows he needs a win, and the same could be said for Hein, who comes into this contest off a pair of defeats of his own. Expect fireworks when Hein and Camacho meet in the center of the Octagon and start launching bombs.

BEA MALECKI VS. DUDA SANTANA
Ultimate Fighter veteran Bea Malecki will make her Octagon debut this weekend against undefeated Brazilian Duda Santana. While both fighters will be competing in the UFC for the first time, Malecki got her first taste of top competition when fighting on the most recent season of the reality show. She came up short in a unanimous decision to current UFC fighter Leah Letson, but Malecki definitely showed some skills, even in defeat. As for Santana, she’s a perfect 3-0 in her young career and she will hope to keep her record unblemished when she squares off against Malecki.

DEVIN CLARK VS. DARKO STOSIC
Light heavyweight prospect Devin Clark has been on a roller coaster ride his last four fights, bouncing back and forth between wins and losses. Training alongside reigning champion Jon Jones, Clark has definitely shown plenty of skills in his wins but he’s come up short in two of his toughest contests to date against Jan Blachowicz and Aleksandar Rakic. Now he’ll look to get a win against Serbian slugger Darko Stosic, who comes into the fight with a 13-1 record that includes a TKO victory in his UFC debut. Stosic looks like a potential threat to the top 15 rankings, but Clark isn’t trying to be anybody’s stepping stone when they clash this weekend.

DANILO BELLUARDO VS. JOEL ALVAREZ
Italian newcomer Danilo Belluardo will make his UFC debut this weekend after rattling off six wins in a row to earn his spot on the roster. Belluardo is a prolific finisher with five of his past six wins ending by either knockout or submission. In his first UFC fight, Belluardo draws Joel Alvarez, who is searching for his first win inside the Octagon after falling short in his debut in February. Prior to that loss, Alvarez was on a 10-fight win streak and he would surely love to restart that momentum in his fight against Belluardo.

ROSTEM AKMAN VS. SERGEY KHANDOZHKO
Two welterweight newcomers make their first walk to the Octagon this weekend when Stockholm’s own Rostem Akman takes the short-notice assignment against Russia’s Sergey Khandozhko. Unbeaten in six pro bouts, Akman might appear to be giving up a lot of experience to the 26-5-1 Khandozhko, but Akman does sport a reported 14-2 amateur record, which levels the playing field a bit more when these 170-pounders battle it out.