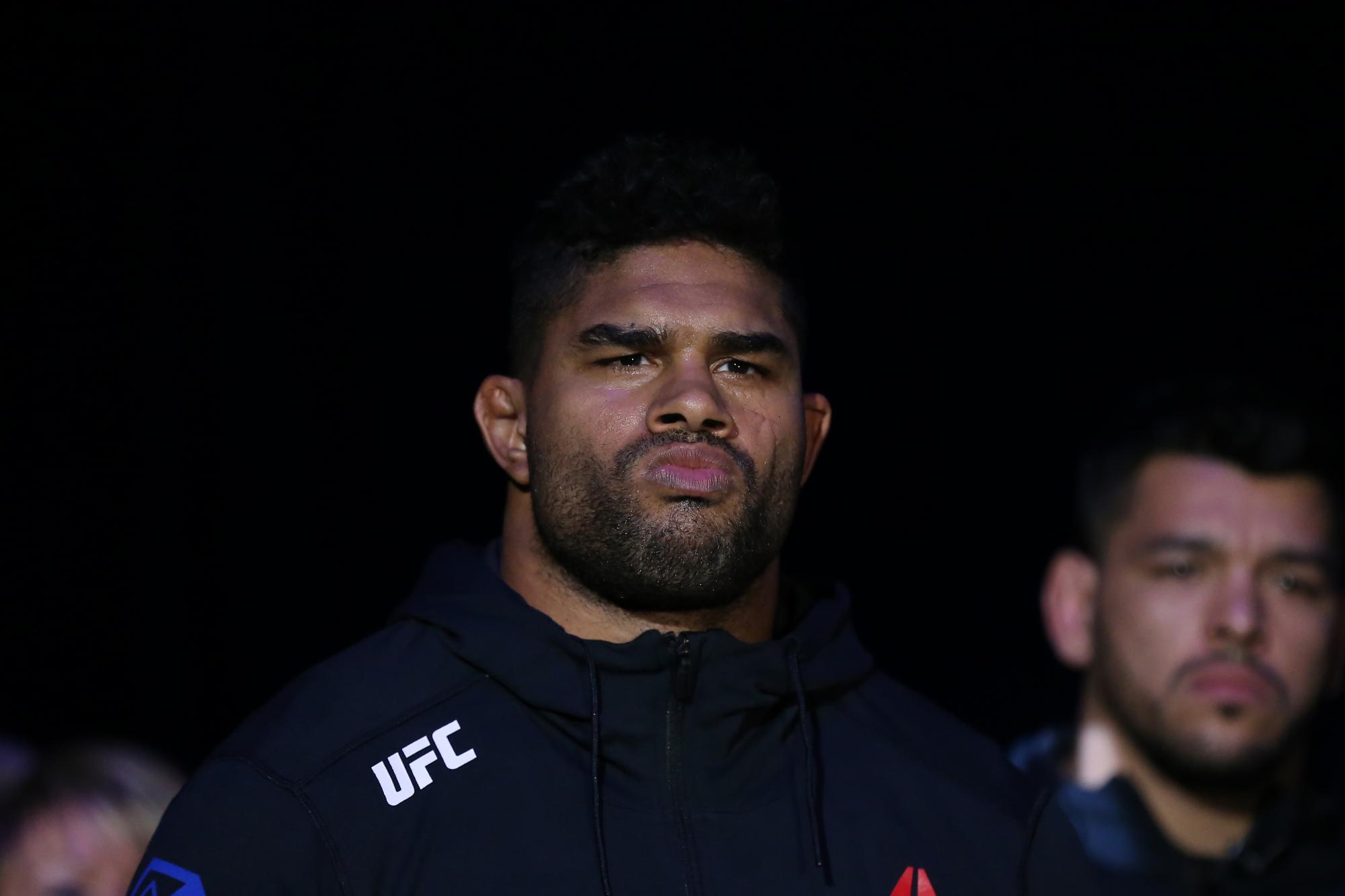 Take a deep dive into UFC Saint Petersburg in this edition of Fight by Fight
By Damon Martin • Apr. 16, 2019

The main event from Saint Petersburg features a former title challenger in Alistair Overeem taking on one of the scariest submission specialists in the sport in Russia’s own Aleksei Oleinik. The fight serves as an opportunity for Overeem to earn his second straight win after defeating Sergei Pavlovich last November in a bout that stopped a two-fight losing streak. Overeem has been training exclusively in Denver for nearly the past year while working alongside former opponent Curtis Blaydes. The change in camps has been great for Overeem as he looks to begin his ascension back into title contention. As for Oleinik, the ageless Russian heavyweight is coming off back-to-back wins, including a stunning first-round submission victory against Mark Hunt in his last outing. Oleinik might be one of the most feared grapplers in the UFC today with his innate ability to find a submission no matter where he’s at on the ground. This should be a true test of wills as Overeem attempts to keep the momentum from his last fight going while Oleinik looks for the biggest win of his UFC career in front of a home crowd in Russia. 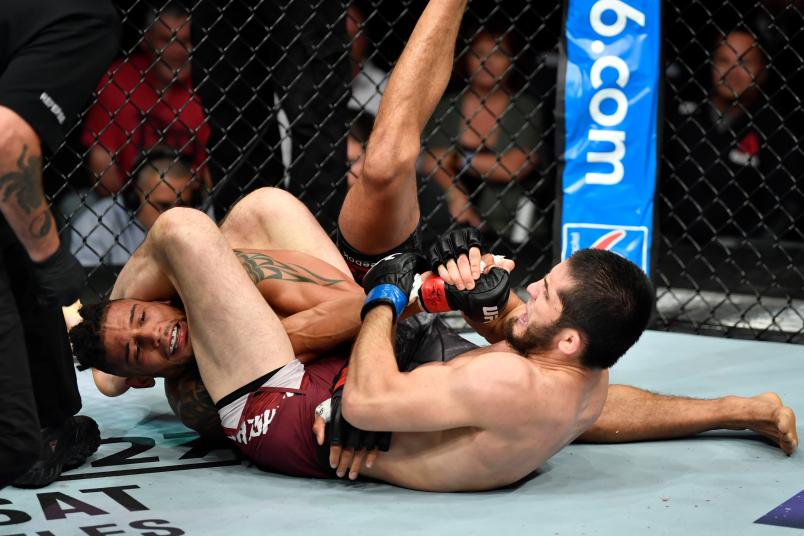 On the back of a four-fight win streak, Islam Makhachev has quickly become one of the most talked about lightweights in the UFC as he continues to climb his way towards the rankings. Makhachev has turned a lot of heads with his last two fights, where he earned a knockout of Gleison Tibau and then pulled off a submission against Kajan Johnson. This weekend, Makhachev will take on UFC newcomer Arman Tsarukyan, who will look to pull off a massive upset in his Octagon debut. Tsarukyan is coming off 12 straight wins, including knockouts in two of his past three fights. He faces a daunting task in his debut, but Tsarukyan has the opportunity to make a huge splash in his debut if he can get past Makhachev. 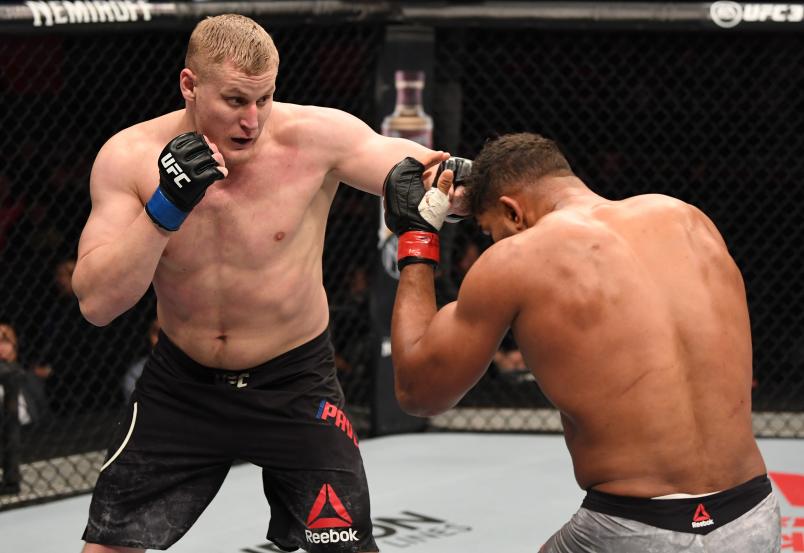 Sergei Pavlovich tasted defeat for the first time in his career when he made his UFC debut last year, so there’s little doubt he wants to get back on track in his second appearance. Prior to that setback against Alistair Overeem in his first UFC fight, Pavlovich had rattled off 12 victories with knockouts in nine of those fights. As for Golm, he comes into this fight looking to get back in the win column following two straight losses. Golm picked up an impressive submission win his Octagon debut but has since fallen on harder times. Golm faces a very tough test this weekend as he steps into his opponent’s backyard while facing Pavlovich in Russia.

Light heavyweight prospect Devin Clark will look to get back on track when he faces Russian newcomer Ivan Shtyrkov, who comes into their fight with a 16-0-1 record. At his best, Clark has looked like a potential top 15 fighter after training alongside light heavyweight champion Jon Jones for the past couple of years. Now he faces a highly touted prospect in Shtyrkov, who has torn through his competition with a long string of impressive wins. Among the fighters who Shtyrkov has defeated are several UFC veterans, including Phil De Fries, Antonio Silva, Fabio Maldonado and Thiago Silva, so the Russian light heavyweight also comes into his debut with some serious credentials to back up that undefeated record.

Former Ultimate Fighter finalist Roxanne Modafferi has never been afraid of challenges, and this weekend she travels to Russia to take on fast rising prospect Antonina Shevchenko in a flyweight contest. Modafferi is a true veteran of the sport with a world class resume that has seen her take on the best of the best throughout her entire career. Following a loss in her last fight to Sijara Eubanks, Modafferi is ready to return to the win column, but to get back there she has to go through Shevchenko, who comes into the fight with an undefeated record, including a win in her UFC debut as well as her appearance on Dana White’s Tuesday Night Contender Series. As the sister to reigning UFC women’s flyweight champion Valentina Shevchenko, Antonina is also spending every day training with the best 125-pound fighter in the world to get her ready for the battle ahead against Modafferi. 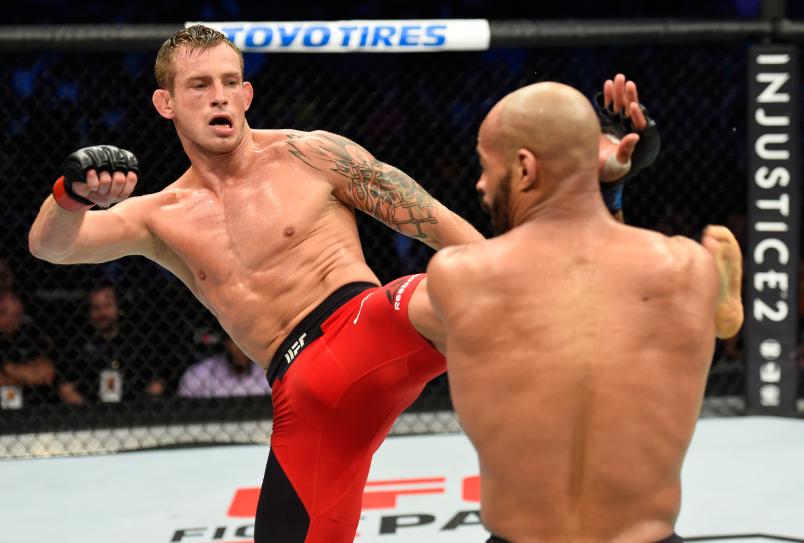 It’s do or die for Polish middleweight Krzysztof Jotko as he makes his return this weekend to face undefeated newcomer Alen Amedovski in Saint Petersburg. Always known for having an exciting style inside the Octagon, Jotko was on a very impressive run with five straight wins, including a victory over former title challenger Thales Leites. Unfortunately, Jotko has fallen on harder times lately with three straight losses, including back-to-back TKO defeats to Uriah Hall and Brad Tavares. Now he faces a serious prospect in Amedovski, who comes into the fight with a perfect 8-0 record that includes knockouts in his past three performances.

Another undefeated Russian will make his debut on the preliminary card as Movsar Evloev looks to shake up the featherweight division with his arrival. Evloev has an unblemished resume, including knockouts or submissions in seven of his career victories. As he looks to kick off his UFC career with another impressive victory, Evloev will have to go through South Korean fighter SeungWoo Choi, who comes into the fight with two consecutive knockout wins in a row and a 7-1 record. 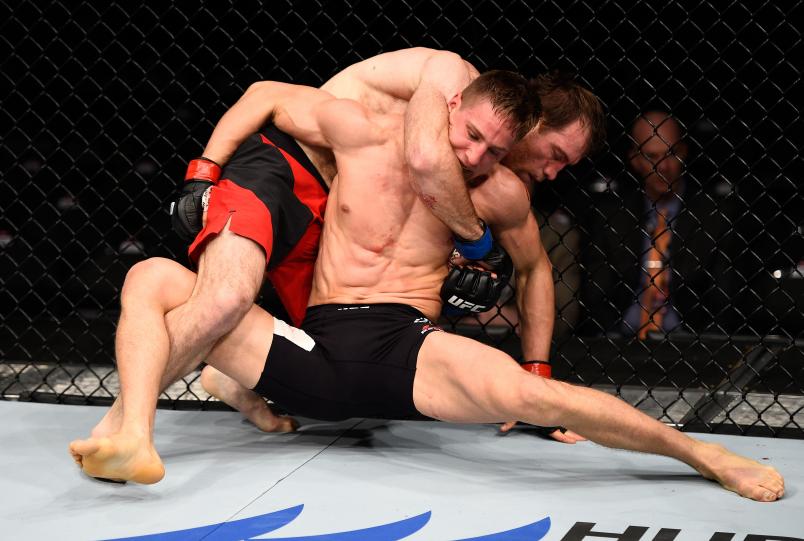 Former sambo champion Sultan Aliev has faced some tough competition since joining the UFC roster but after bouncing back and forth between wins and losses, there’s little doubt he wants to find some consistency with his career starting with his upcoming fight against Keita Nakamura this weekend. Aliev had rattled off four straight knockouts prior to joining the UFC roster, but he’s gone just 1-2 in his past three fights. Now he faces Nakamura, who is also looking to build some momentum after going 4-3 in his second stint in the UFC, including a win in his last fight against Salim Touahri. Nakamura has shown flashes of brilliance at times, but he has to step into his opponent’s backyard this weekend if he hopes to earn wins in back-to-back fights. 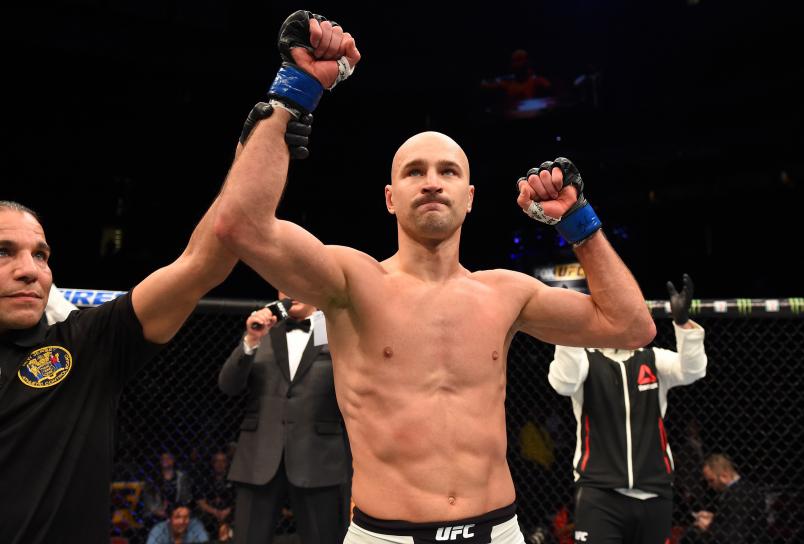 Alexander Yakovlev has picked up some big wins in his UFC career, but he’s fallen short in his last two fights against Zak Cummings and reigning welterweight champion Kamaru Usman. Now Yakovlev looks to get a win against 20-1 lightweight Alex da Silva, who comes into this fight off back-to-back wins. Da Silva is a proven finisher with a string of knockouts on his record, but he undoubtedly faces the toughest test of his career when he squares off with Yakovlev in Russia. 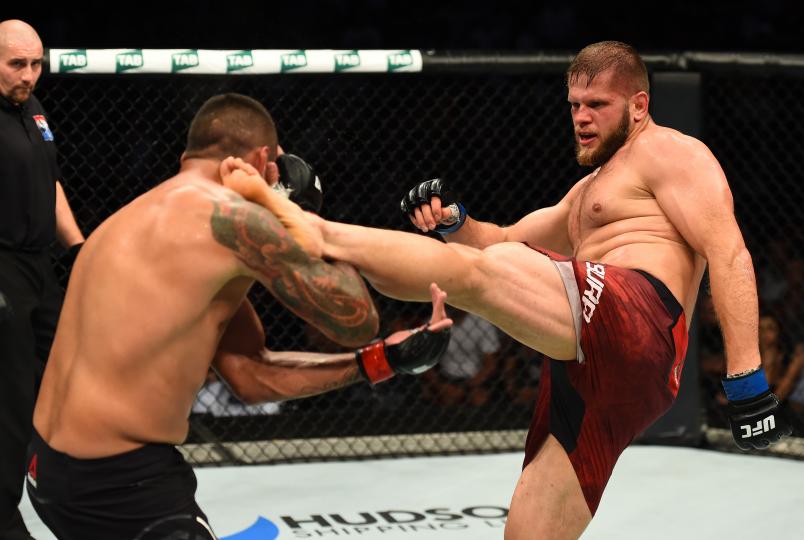 Heavyweights Marcin Tybura and Shamir Abdurakhimov are both ranked in the top 15 and now they meet, with the winner taking a big step forward in a perilous heavyweight division. Tybura has big fight experience after headlining a past UFC card, and he’s coming off a win over Dutch heavyweight Stefan Struve while also holding a victory against former champion Andrei Arlovski. As for Abdurakhimov, he has won his last two fights and four out of his last five, with his only setback coming against former title challenger Derrick Lewis in a fight he was largely controlling until he suffered a fourth-round TKO. Now both fighters are looking to climb up those rankings in an effort to get into title contention. 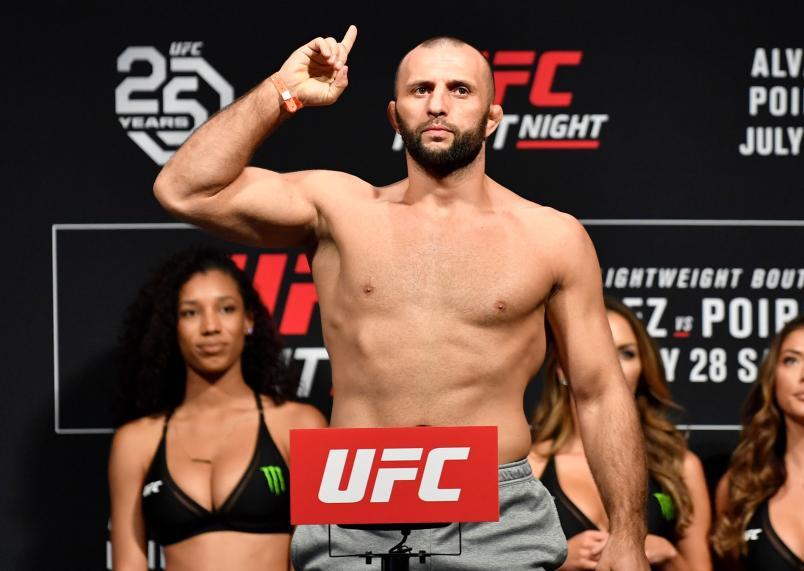 Gadzhimurad Antigulov had his 14-fight win streak snapped in his last fight against Ion Cutelaba, so now the Russian is looking to get back on a winning path when he faces Michal Oleksiejczuk this weekend. At his best, Antigulov cracked the top 15 rankings with wins over Marcos Rogerio de Lima and Joachim Christensen in consecutive fights. Now he faces Oleksiejczuk, who comes into the fight with an undefeated record in his past 11 contests, including a devastating first-round knockout against Gian Villante in his last fight. As the light heavyweight division continues to search for more contenders, the winner of this fight could be in a prime position to pounce on a top 15 ranking. 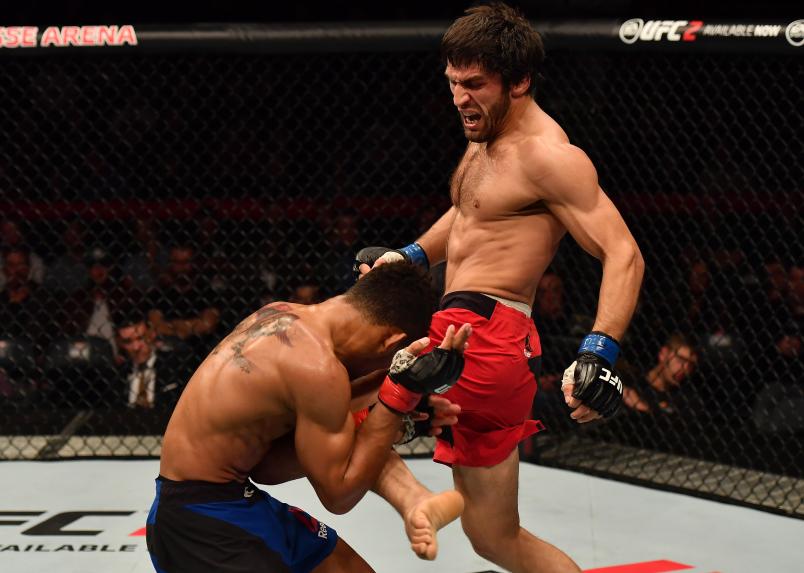 With a 2-1 record through his first three fights in the UFC, Magomed Mustafaev looks to jump start his career with his return to action on Saturday against undefeated Octagon rookie Rafael Fiziev. Prior to a loss to former interim title contender Kevin Lee in his last fight, Mustafaev had picked up two wins in the UFC, including a knockout over former Ultimate Fighter competitor Joe Proctor. Now he faces Fiziev, who has finished all of his opponents - including five knockouts and one submission - along the way.