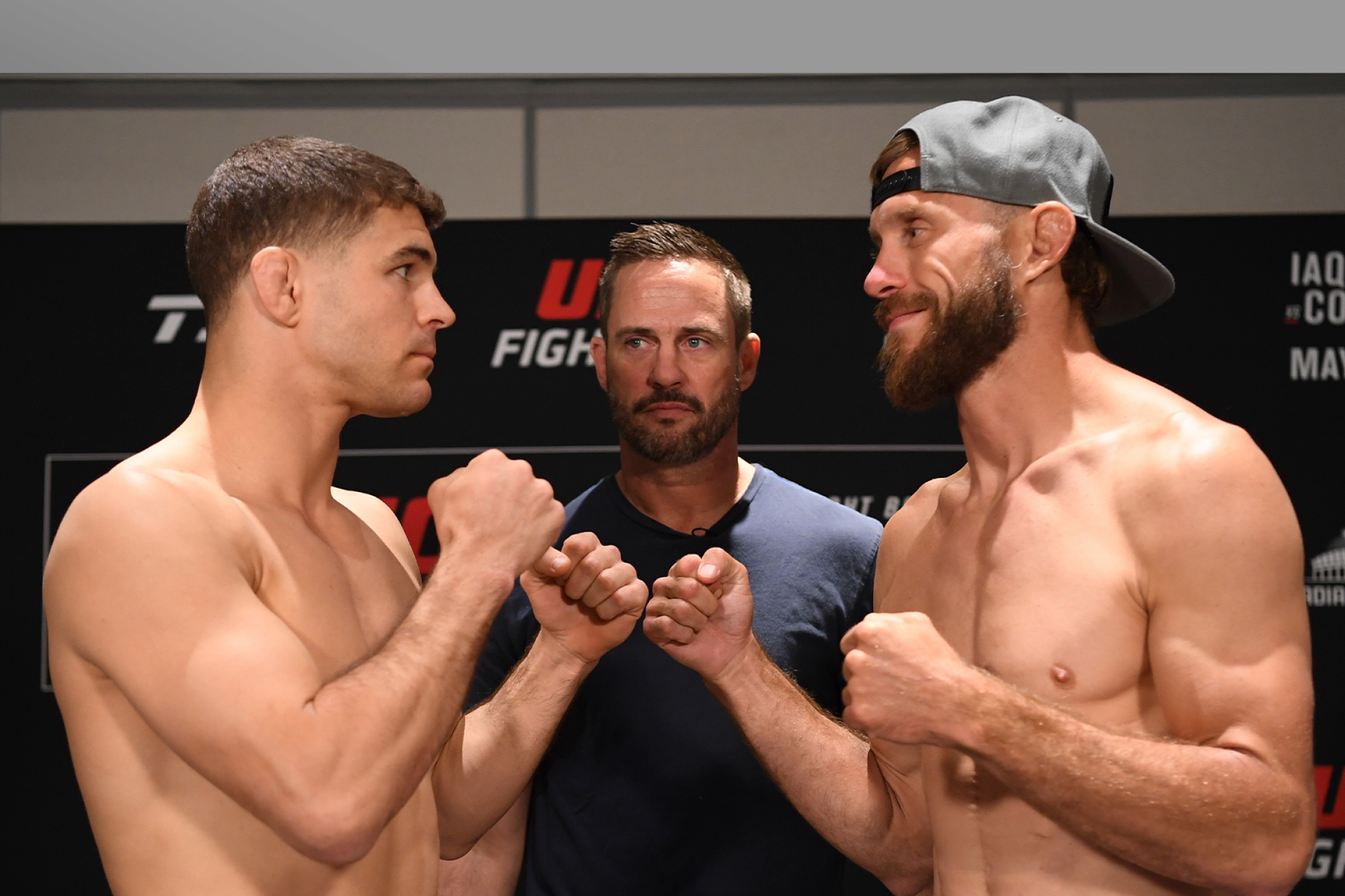 All The Big Winners From Canadian Tire Centre In Ottawa, Ontario, Canada
By Thomas Gerbasi • May. 4, 2019

Who came out on top in Ottawa? We have all the results from UFC Fight Night: Iaquinta vs Cowboy

Bantamweight newcomer Cole Smith picked up a win in his Octagon debut, keeping his perfect record intact with a three-round unanimous decision over Mitch Gagnon.

Smith threatened a kimura almost immediately as the two locked up against the fence. Gagnon got loose and Smith scored a quick takedown, but the veteran rose quickly and the two separated for a stretch until going back into the clinch late, with Smith getting off some hard shots.

Midway through the second stanza, Smith got the fight to the mat and worked for a rear naked choke as he took Gagnon’s back. Gagnon again fought his way free, but it was another solid round for the newcomer.

Fighting with a sense of urgency, Gagnon hurt and dropped Smith early in the final round and then went fishing for submissions – first an armbar, then a guillotine choke. Smith shook the cobwebs off and escaped, nearly sinking in a rear naked choke in response before the final horn sounded.

Adams used his range well in the first round, peppering Bhullar as the Canadian tried to get inside to implement his grappling game. That didn’t happen for Bhullar until the second minute of round two, when he was able to score the takedown on “The Kraken.” On the feet, though, Adams still held the edge, and that was the case in the final round as well. With a minute remaining, Bhullar scored another takedown, and that may have been the deciding factor on the scorecards, as the former Olympian emerged victorious by scores of 29-28 twice and 30-27.

With the win, Vancouver’s Bhullar moves to 9-1. Houston’s Adams falls to 5-1.

After a controversial decision loss to Sheymon Moraes in his UFC debut, Matt Sayles kept the judges out of it the second time around as he submitted Kyle Nelson in the third round of their featherweight bout.

Sayles’s striking was sharp in the opening round, and with a little over two minutes left, Nelson was hurt. The Canadian soon became the recipient of several unanswered strikes, but Nelson was apparently playing possum, though, as he soon went after Sayles’ legs. Sayles escaped and unleashed more ground strikes, but Nelson remarkably made it out of the round.

Nelson chased a guillotine early in the second frame, but Sayles easily eluded any serious danger. That wasn’t the case with under two minutes remaining, though, as Nelson took Sayles’ back on the mat and nearly finished the bout with a rear naked choke.

But in the final round, it was Sayles’ ground game that did the job, as he finished Nelson with an arm triangle choke. The official time was 3:16 of round three.

Welterweight veteran Nordine Taleb was in prime form in his three-rounder with late-notice newcomer Kyle Prepolec, as he pounded out a unanimous decision victory.

Prepolec, who stepped in for the injured Siyar Bahadurzada, gave a gutsy effort over all three rounds, and while he had his moments, Taleb was on target with his striking game all night as he snapped a two-fight losing streak in impressive fashion.

All three judges saw it 29-28 for Oregon’s Morales, now 9-3. Montreal’s Zahabi, who was fighting for the first time since a November 2017 loss to Ricardo Ramos, falls to 7-2.

The first round was fought entirely on the feet, with Morales edging matters due to being the busier of the two. The back and forth action continued into round two, but with under two minutes left, Zahabi scored a takedown, momentarily changing the complexion of the bout. Morales wasn’t staying grounded for long, and as he rose, he went back to implementing his striking game, which served him well in the final round as well. Zahabi did land another takedown in the third, but Morales got up immediately and kept the heat on with his strikes until the final horn.

The bantamweight journey of former Ultimate Fighter winner Macy Chiasson continued to impress, as the unbeaten Louisianan stopped Sarah Moras in the second round.

Chiasson rushed Moras as soon as the bout started and she got put on her back for her trouble. Moras went to work from the top position and she landed several hard strikes before Chiasson escaped with a little over a minute left. Then it was the New Orleans native’s turn, and she landed enough hard shots that she may have conceivably stolen the round.

Moras went all-in for the takedown to begin round two, but it was Chiasson winding up in the top position as the combatants went to the mat. More elbows from Chiasson followed, and once she got into the full mount, it was just a matter of time before the unanswered strikes prompted referee Yves Lavigne to step in and halt the bout at the 2:22 mark of the second stanza.

Not surprisingly, Sanchez (12-4) controlled the action when it took place on the mat in round one, but Quebec City’s Barriault (11-2) was able to weather the ground attack of his foe and get back to his feet, and in the second half of round two, Barriault unleashed a series of punishing strikes that had Sanchez wobbly at the end of the frame.

Sanchez got his bearings back in the third, and he used his grappling attack to once more stifle the striking of Barriault, and it was the key to his victory via three scores of 29-28.

Walt Harris gave Serghei Spivac a rude welcome to the UFC, as he stopped the previously unbeaten Moldovan in the first round.

From the start, it was evident that Harris’ speed and accuracy was going to be an issue for Spivac, and he made it one, repeatedly tagging the newcomer before putting him on the deck. A series of unanswered blows followed, and Jerin Valel stepped in, stopping the bout at the 50-second mark of the opening frame.

Bantamweight prospect Brad Katona suffered the first loss of his pro career, as Merab Dvalishvili shut the Canadian out over three rounds.

The energetic attack of Dvalishvili was on display from the start and it served him well, as he landed strikes from odd angles and then scored a late takedown that was followed by several hard ground strikes.

Dvalishvile got the fight back to the mat in the opening minute of the second stanza, and he kept Katona grounded until a restart by referee Kevin MacDonald with a little less than 90 seconds remaining. Dvalishvili was able to score another takedown before the horn, though, cementing the round for the Georgia native.

Katona wasn’t able to get any serious offense going in the final round, allowing Dvalishvili to earn his second consecutive win via three scores of 30-27.

With the win, Dvalishvili ups his record to 9-4. Winnipeg’s Katona falls to 9-1.

Featherweights Shane Burgos and Cub Swanson put on an exciting striking display for three rounds, with Burgos besting the veteran via split decision.

Fought entirely on the feet, the first round featured high-level striking from both fighters, who mixed in punches and kicks with equal effectiveness. Swanson did go back to his corner with bruises under both eyes, but it wasn’t a dominant frame for either fighter.

The punishing chess match continued in round two, with Swanson and Burgos taking turns getting their strikes in. Burgos appeared to edge out the round, and Swanson responded with more aggression to start the final frame. By this time, both fighters were marked up, and Swanson went for the takedown to add more points to his tally. He didn’t get it, but he scored with some hard shots while the two grappled against the fence. After the two separated, Burgos had a good run as he walked Swanson down, landing a series of strikes down the stretch that capped off the hard-fought victory.

Longtime middleweight contender Derek Brunson got back in the win column for the first time since October 2017, using a strong start and finish to turn back the challenge of Toronto’s Elias Theodorou via unanimous decision in the UFC Fight Night co-main event at Canadian Tire Centre.

Brunson got the fight to the mat in the opening minute and quickly moved into mount. Theodorou battled his way to his feet, but Brunson took him right back down, nearly locking in a rear naked choke. The Canadian ultimately got loose and to his feet, where the duo continued to grapple. Midway through the frame, they separated, and while Theodorou started to get on the board, it was clearly Brunson’s round.

The crowd got restless with the lack of sustained action in the second round, but the pace was working to Theodorou’s advantage as he used movement and an unorthodox attack to outwork Brunson, who nonetheless landed a couple hard shots heading into the final frame.

Brunson got a quick takedown to open up the final round, yet Theodorou got loose and back to his feet. With two minutes left, though, Brunson scored a huge slam on his foe and kept him locked up as the two went back to their feet. Now the momentum was on Brunson’s side, and it carried him to the victory.

Cerrone was Cerrone throughout the opening round, staying busy and firing off hard head kicks that missed the mark until the final 30 seconds, when a kick turned into a knee that landed flush. Iaquinta took it well, though, and despite suffering a cut under the right eye, he had a solid round in his own right as he mixed up his punches and kicks well, marking Cerrone up under the eyes.

Kicks from Cerrone were marking up Iaquinta’s leg, prompting the New Yorker to start putting more weight on his punches as he looked to slow his opponent’s offensive output. Iaquinta even started throwing his own kicks to the head, keeping Cerrone guessing. In the final 30 seconds, Iaquinta briefly wobbled Cerrone, but “Cowboy” shook off the blow and fired back until the end of the frame.

Iaquinta’s nose soon started bleeding in the third, and while his face was battered, he kept the pressure on Cerrone, who responded with stiff jabs from range as he used his height and reach advantage and then added in power punches and kicks, dropping Iaquinta late. Cerrone tried to finish the fight with ground strikes, but the horn intervened.

Cerrone dropped Iaquinta a second time early in round four, this time with a kick to the face, but the gritty Long Islander scrambled to his feet. Midway through the round, Iaquinta reminded Cerrone that he was still there with a left hook to the face, and he added a second one moments later, but Cerrone fired back with hard combinations that kept him a step ahead of his foe.

After a visit from the Octagonside physician before the start of round five, Iaquinta left his corner in search of a miracle turnaround, but even when he landed his right hands on the veteran Cerrone, “Cowboy” shook them off as he kept peppering “Raging Al” with punches and kicks, taking his output to another level in the closing seconds, much to the delight of a crowd that got a show to remember in the main event.