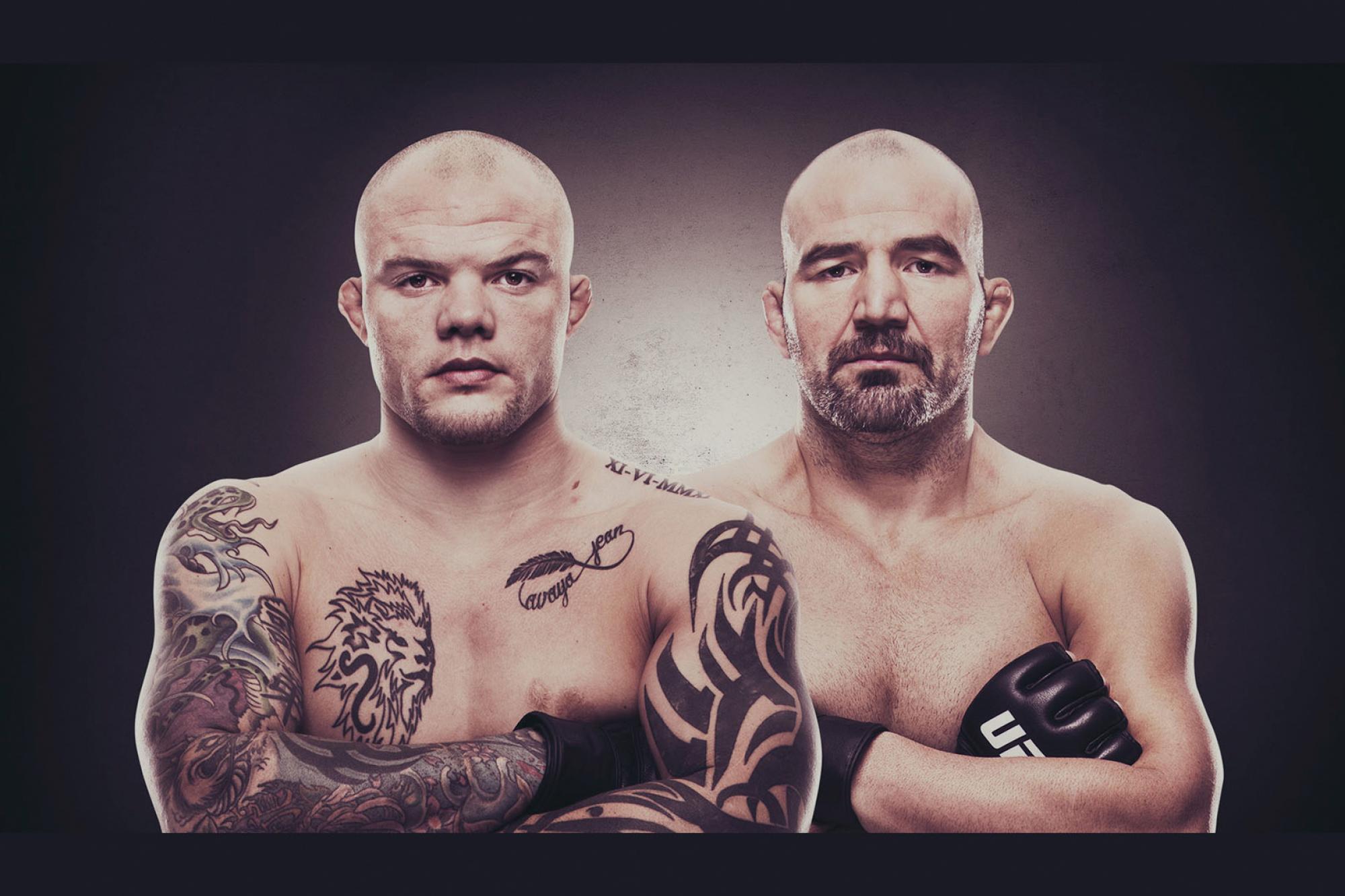 With both fighters known for their striking and underrated ground games, UFC Jacksonville has heavy implications for a dangerous division.

In his first UFC appearance since September 2018, Chase Sherman looked better than ever in stopping Octagon newcomer Ike Villanueva in the second round of the heavyweight opener.

Ground work was not on the menu for either fighter in this one, as both Sherman and Villanueva were determined to wage war on the feet from start to finish. Sherman had a big first round as he battered the inside and outside of Villanueva’s left leg with kicks while landing flush punches upstairs. There was no quit in Villanueva, who got in his share of shots, but not nearly enough to get Sherman’s attention, and in the second, the “Vanilla Gorilla” closed the show, setting up Villanueva for a left elbow that sent the Texan down and brought in referee Michael Cardoso to stop the fight at :49 of round two.

In a meeting of bantamweights moving up to 145 pounds for the night, Brian Kelleher removed Hunter Azure from the ranks of the unbeaten, stopping the Contender Series graduate in the second round.

There was no shortage of action in the opening round, with both fighters eagerly getting into exchanges on the feet throughout. Azure was the faster and busier of the two, though, allowing him to take the lead in the first five minutes.

Kelleher opened round two with an overhand right that got Azure’s attention, and while the Arizonan kept throwing back, he started to take more and more shots, and with Kelleher in a rhythm, he scored with a flush left hook that put Azure down. Two hammerfists on the grounded Azure followed, with referee Jason Herzog stopping the contest at the 3:40 mark.

Venezuelan lightweight prospect Omar Morales got to 10-0 the hard way, as he had to dig deep to pull out a unanimous decision win over Gabriel Benitez in an exciting back and forth scrap.

After a tactical opening to the bout, Morales and Benitez began letting their punches and kicks go with more frequency, each getting in enough solid strikes to make scoring the round a tough task for the judges.

There was more of the same in round two, with the fighters taking turns landing their shots. With two minutes left, though, Morales made a run, punctuating each punch and kick with a yell that seemed to amp him up heading into round three.

By the final round, both fighters were bloodied and still trading momentum with seemingly each strike. Benitez, despite a bad cut on his shin, kept throwing kicks, and Morales refused to stop marching forward, leaving little to separate the two by the time the final horn sounded.

Eubanks (6-4) was sharp with her strikes in round one, scoring with compact blows while Moras swung wilder shots. Some of those haymakers landed, but many more were countered by “SarJ,” who turned in a quality round.

Moras (6-7) got more aggressive and effective in the second stanza, but Eubanks responded well by implementing her grappling game in the clinch and then on the mat, where she controlled position and then landed with several ground strikes until the end of the frame.

Eubanks extended her lead in the third round, but Moras did have a late surge left in her as she nearly locked in an armbar. It wasn’t meant to be, though, as Eubanks got free and finished up the three rounder with more ground strikes, sealing her victory on the scorecards by tallies of 30-27 twice and 30-26.

Thiago Moises made a major statement in his lightweight bout against Michael Johnson, bouncing back from a rough first round to submit “The Menace” in the second frame.

Johnson dominated the first five minutes, tossing aside Moises’ two takedown attempts while peppering his foe with a busy striking attack that saw him landing with punches and kicks upstairs and downstairs. It was a different story in the second, though, as Moises went all-in for a takedown. And when he didn’t get it initially, he kept pushing and pulled guard, locking up Johnson’s leg and producing a tap out due to a heel hook 25 seconds into round two.

The 41-year-old wonder did it again, as Andrei Arlovski spoiled the UFC debut of highly-touted newcomer Philipe Lins, winning a three-round unanimous decision.

Arlovski looked good in the opening frame, staying at distance and using the southpaw stance to land plenty of kicks to Lins’ legs. When the Brazilian got close, he had his best moments, as his fast hands allowed him to tag Arlovski during exchanges. Arlovski took all the shots well, and he quickly reset after each exchange.

Sticking to the game plan, Arlovski continued to fight at his pace in the second and third rounds, and outside of a few rushes from Lins, it was the experience of the former heavyweight champ paying dividends and garnering him the victory.

After a couple heated exchanges to start the fight, Simon took Borg to the mat but wasn’t able to keep him there long. Once standing again, the two remained locked up for a spell before separating. When the punches flew, each shot was designed to make an impression, but Simon mixed things up nicely, getting another pair of takedowns in the final minute.

Simon (16-3) dumped Borg to the canvas early in round two, using his strikes to set up the takedowns nicely. Borg wasn’t being held down, but the takedowns were scoring for Simon. Borg got more aggressive on his feet as the two stood, with Simon eager to respond, and while the Albuquerque native had success with his standup game, Simon’s strength was giving him issues when the two grappled.

Borg (13-5) ripped off some clean body shots to start round three, but just when he was gaining momentum, it was another Simon takedown. With a little over two minutes left, Borg got back to his feet, Simon attached to him as they battled against the fence until Borg got loose. In the closing seconds, Borg had some of his best moments, only to be on the short end of the verdict via scores of 29-28 twice and 28-29.

Drew Dober continued his march toward the lightweight top 15 in impressive style as he halted Alexander Hernandez in the second round to extend his winning streak to three.

There was no feeling out process between the two 155-pounders, as they each threw hard shots until Hernandez scored a quick takedown in the second minute. Dober got up immediately and it was back to striking for the pair. For the rest of the round, Hernandez’ movement and kicks largely kept Dober at bay, but Dober did get off a nice combination in the final minute.

Dober got closer to Hernandez on a more consistent basis in round two, and with under two minutes to go, a left hand sent Dober sprawling into the fence. Moments later, Hernandez killed his foe’s momentum with a takedown, but when Dober got up, he hurt Hernandez again. Once more, the Texan got a takedown, but this time, Dober got up even quicker, and after he scored with a series of unanswered blows, referee Herb Dean stopped the fight at 4:25 of the second stanza.

Ovince Saint Preux gave a good account of himself in his heavyweight debut but fell short of victory against Ben Rothwell via split decision.

Most of the offense in the opening two minutes came from Rothwell, who stalked Saint Preux and landed more than a few right hands. Saint Preux did his best to make Rothwell chase him while he countered, but after throwing a kick that got caught, he had Rothwell on top of him looking to secure his patented guillotine choke. Saint Preux defended well and got free with 30 seconds left, but it was all Rothwell in the first.

Saint Preux landed three left kicks upstairs to start round two, Rothwell walking through them en route to a clinch against the fence. Saint Preux fought his way loose and got a little busier with his strikes, Rothwell responding with some knees in the clinch. Fatigue was soon evident on the face of Saint Preux, and Rothwell sensed it as he bulled OSP to the fence. With 30 seconds left, Saint Preux got loose and scored a flash knockdown of his foe, finishing the round strong.

With the fight possibly up for grabs in the final round, both heavyweights opened up, each having their moments, but Saint Preux landed the harder shots down the stretch, only to fall short of the win.

Glover Teixeira def Anthony Smith by TKO at Round 5 (1:04)

Glover Teixeira continued to show that there’s life after 40 in the UFC, as he scored a punishing fifth-round TKO of fellow light heavyweight contender Anthony Smith in the main event of UFC Jacksonville, extending his current winning streak to four while putting himself back in the 205-pound title picture.

Smith drilled Teixeira with a right hand to begin the bout and he followed with a thudding kick to the leg. Teixeira wasn’t bothered by the blows as he marched forward, but Smith looked sharp as he pumped jabs out and followed with the right. Just before the midway point, Teixeira got off some punches as he had Smith against the fence, but an inadvertent low blow by the Brazilian brought a brief halt to the bout. When the action resumed, Smith got back to business, mixing up his strikes nicely while Teixeira focused on leg kicks.

Keeping his output high, Smith scored well for much of the second round, swelling up Teixeira’s left eye with a flush righthand. But in the second half, the Nebraskan appeared to be slowing down as Teixeira surged, rocking Smith with a head kick and following up with several hard shots as the momentum shifted.

A caught kick by Smith led to the bout’s first trip to the mat, but neother fighter was interested in a ground game. Seconds after the two stood, Teixeira rocked Smith with a right uppercut and went on the attack, dropping his foe to the mat with a left hook. Smith withstood the first follow-up barrage by the Brazilian, and while Teixeira kept the heat on, “Lionheart” was able to make it to the end of the round.

Another right uppercut by Teixeira staggered Smith to begin round four, yet while Smith kept firing back, Teixeira was landing more and more shots, prompting a desperation takedown attempt by the Nebraskan. After a spell on the mat, Teixeira stood, bringing the fight back to the feet. More punches were traded, and this time it was Teixeira opting to put the fight on the canvas, where the ground-and-pound began again. Remarkably, Smith survived again, but he was clearly going to need a finish in the fifth to win the fight.

Teixeira got the fight to the mat as the fifth opened, and soon the Brazilian moved into the mount. Seconds and a few more punches later, referee Jason Herzog had seen enough, stopping the fight at 1:04 of the final round.