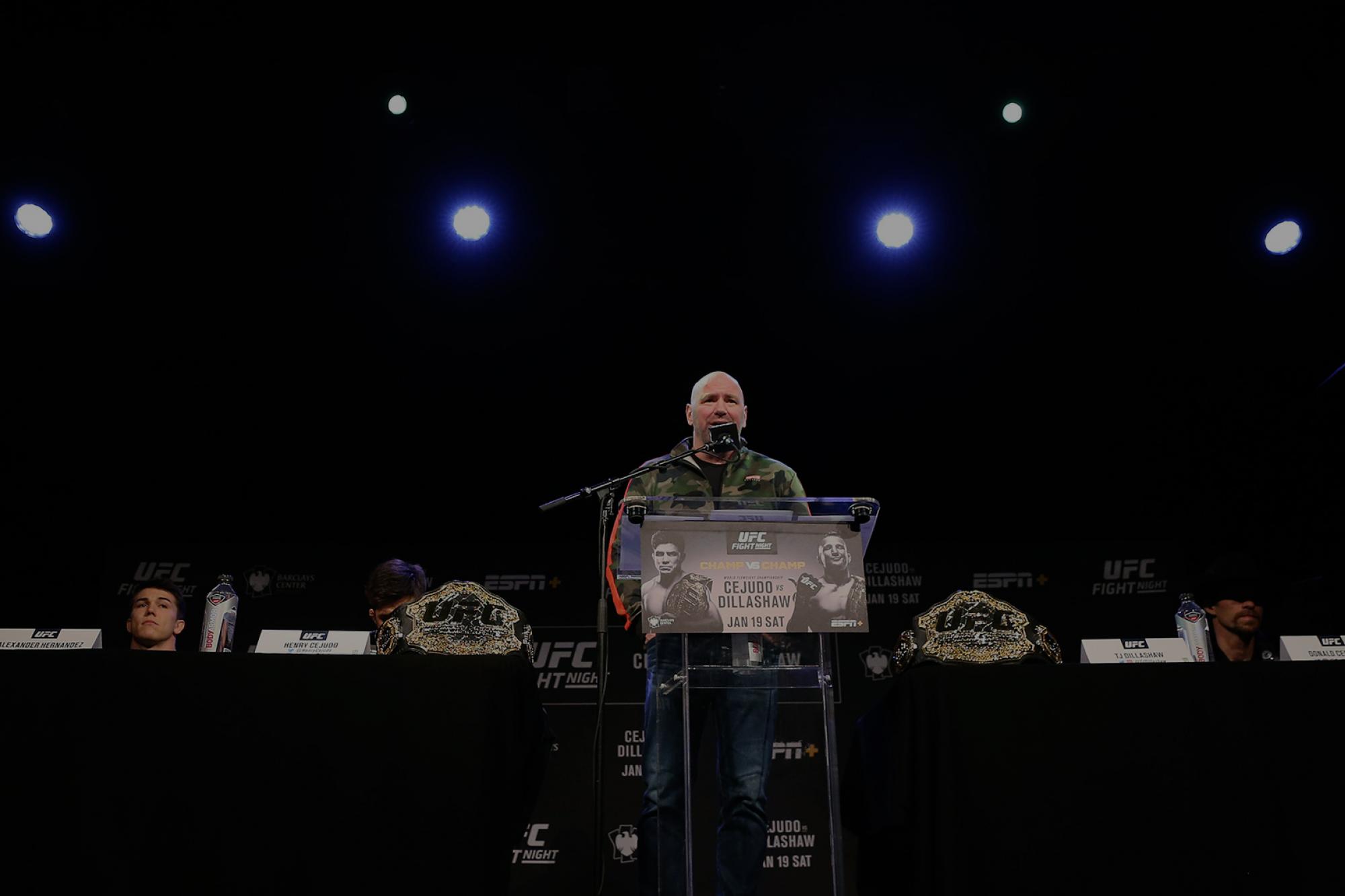 UFC Going Next Level With ESPN

With Fight Night Brooklyn, UFC makes its live-event debut on ESPN, and the impact the deal will have is not lost on the athletes.
By Zac Pacleb - UFC.com • Jan. 18, 2019

With a superfight between bantamweight champion TJ Dillashaw and flyweight champion Henry Cejudo as the main event, Fight Night Brooklyn already has the makings of a memorable night. However, the hype around the card is shared with the fact that the event is the first to take place under the ESPN banner.

After a 7-year stint with Fox, UFC inked a 5-year deal with the Worldwide Leader in Sports, further cementing the promotion’s status in professional sports. The importance of the partnership isn’t lost on the fighters either.

“When you think of sports, you think of ESPN,” Dillashaw said. “That’s just super exciting for me, and to be the first one to get out there and be the main event, couldn’t be any happier.”

Seeing fight nights on ESPN isn’t the only tangible difference. Even though the first event of the deal has yet to get underway, fighters are already noticing the changes in their day-to-day lives.

Despite the obvious milestone surrounding the event, not every athlete is focused on where people watch it. Fight week is a whirlwind of media obligations and weight cutting for fighters, and once they’re in the Octagon, they only have one priority.

“Honestly, I have tunnel vision right now,” welterweight Geoff Neal said. “I really don’t care. I could fight on Nickelodeon, and I’ll still fight. It’s just another fight. I’m about to get into the cage with another guy that’s trying to beat me up.”

That said, the weight UFC’s deal with ESPN carries is hard to deny.

In its 25 years of existence, UFC has grown, had its difficulties and ultimately proved mixed martial arts is as legitimate as any other major sport or league in the world. From its apparel deal with Reebok to the building of the UFC Performance Institute in Las Vegas, the organization continues to make moves showcasing the growth of the sport and the company.

For veterans in the organization, fighting on ESPN highlights UFC’s exponential development as a promotion and in the eyes of the mainstream public.

“I think when I started, my first UFC fight was on Facebook,” UFC flyweight Joseph Benavidez said. “It got to this streaming platform and Fox, and this and that. It’s just cool. It’s not one of those things you expect.

“But it makes sense, being one of the best sports (and) one of the fastest growing sports, (that) we’re on a great sports network.”

Almost nothing is certain when the cage closes on Kyle Stewart and Chance Rencountre at the start of the early prelims. Few things are when it comes to mixed martial arts and the sports world in general.

Ahead of the UFC's anticipated debut on ESPN+, the UFC will hold a press conference with Dana White, Henry Cejudo, TJ Dillashaw, Alex Hernandez, and Donald Cerrone, live from Brooklyn, New York at 2p/11a ETPT.

On September 7, 1979, few people were certain if ESPN would work, and the Bristol-based operation has gone on to live up to its slogan as the “Worldwide Leader.” Similarly, when the first Ultimate Fighting Championship took place on November 12, 1993, even fewer really knew what they were about to witness.

A quarter-century later, the two are officially partnered, each looking to bring new fans into the fold with both parties, the fighters and UFC fans old and new as the beneficiaries.

“ESPN is in every household,” Rencountre said. “It’s a much broader network for us and the fighters to get us out there and show what we can do — that we are professional athletes, that we are the top of the food chain in our sport. It’s really humbling and it’s a cool feeling.”

Related: How to Watch UFC on ESPN+ | Sign up for ESPN+ now!