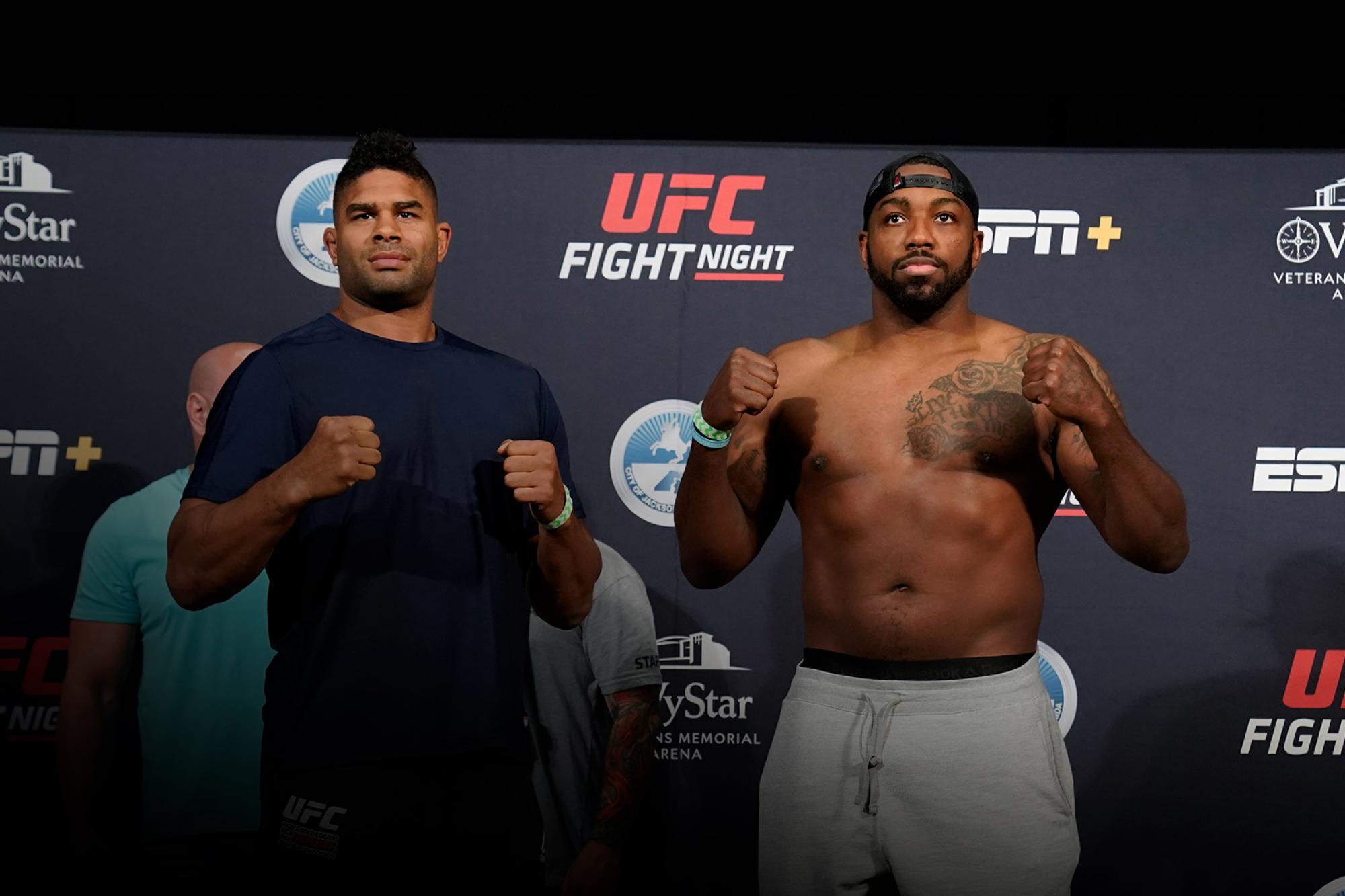 Find out all of the results from the action from the May 16 card in Florida
By Thomas Gerbasi, on Twitter @tgerbasi • May. 16, 2020
ESPN/ESPN+ Prelims, 6pm/3pm ETPT
Rodrigo Nascimento Ferreira def Don’Tale Mayes by submission, RNC, Round 2, 2:05

Nascimento’s early aggression was nullified by a Mayes clinch against the fence, but only momentarily, as the Brazilian got the better of the action standing and on the ground after he scored a takedown with a little over 90 seconds left in the opening round.

In the second, Nascimento got to work with his grappling even earlier, and once on the mat, it was game over, as he locked in a rear naked choke that forced a tap out by Mayes at 2:05 of round two.

With the win, Belo Horizonte’s Nascimento moves to 8-0. Louisville’s Mayes falls to 7-4.

Cortney Casey’s UFC flyweight debut was a successful one, as she scored her first finish since 2016 by submitting Mara Romero Borella in the first round.

Borella got the fight to the mat in the second minute of round one, but Casey patiently worked for an armbar from her back, and once she got it locked up, Borella tapped out, with the end coming at the 3:36 mark of the opening frame.

Nate Landwehr earned his first UFC victory the hard way, as he battled tooth and nail for three rounds with longtime featherweight contender Darren Elkins before leaving the Octagon with a three-round unanimous decision win.

After some solid striking to kick off the fight, Elkins locked up with Landwehr and took him to the canvas. Landwehr got back to his feet and free midway through the frame, and while it was a clash of heads that opened a cut on Elkins’ face before the end of the round, the Tennessee product was able to score well with his strikes.

The featherweights’ pace was frantic in round two as they traded throughout. But it was Landwehr who was getting the better of the action. After a brief break for the Octagonside physician to check the cuts on Elkins, the two got back after it, with the showboating Landwehr keeping his edge in the striking game.

Landwehr avoided Elkins’ early takedown attempts to start round three, but despite the blood covering his face, “The Damage” still landed effectively and kept pressing. Landwehr wasn’t going anywhere, leading to more back and forth action before the final horn sounded.

Nate Landwehr talks after his unanimous decision win against Darren Elkins in Jacksonville.

Featherweight up and comer Giga Chikadze made it 3-0 in the Octagon with a three-round unanimous decision win over gutsy newcomer Irwin Rivera, who replaced Mike Davis on less than two days’ notice.

Rivera (9-5) showed no sign of the first-time UFC jitters as he got down to business with a busy and unorthodox striking attack. By the closing stages of the round, though, Rivera had slowed down and Chikadze began to implement his own standup game.

In the second, Chikadze (10-2) pulled away as he bloodied Rivera and kept a varied array of punches, knees and kicks coming.

Early in the third, a flush knee dropped Rivera, but “The Beast” jumped right back up throwing punches, continuing to impress with his chin, grit, and refusal to stop trying to win. It was Chikadze’s night, though, as he earned the victory via scores of 30-27 twice and 30-26.

In a meeting of Contender Series veterans at middleweight, Kevin Holland made short work of Anthony Hernandez, stopping the Californian in less than a minute.

Texas’ Holland went on the attack as soon as the fight began, and after landing some solid shots upstairs, including an elbow, a knee to the body dropped Hernandez and forced him to cover up. Holland went in for the finish and he got it, with a series of unanswered strikes bringing in referee Michael Cardoso to halt the bout. The official time was :39 of round one.

Kevin Holland talks about his first-round knockout win in Florida.

Unbeaten welterweight prospect Miguel Baeza made a huge statement in his bout with veteran Matt Brown, stopping “The Immortal” in two rounds in just his second UFC bout.

Baeza drilled Brown with several kicks to the calf in the early going, and though they were bothering the Ohio native, he kept moving forward, getting off a blistering combination with under three minutes to go. Baeza got briefly rattled and nearly went down, but he shook off the shots and fired back, later landing some good shots, including a right hand that put Brown on the canvas. Baeza fired away with strikes on the mat, but Brown got back to his feet with under a minute left and made it to the end of the round despite taking another hard combo from the Florida product just before the horn.

Baeza opened up with a 1-2 to start round two, and while Brown took those shots, a left hook put the Ohioan on the deck, and seconds later, follow-up shots prompted referee Jason Herzog to stop the fight 18 seconds into the second stanza.

Miguel Baeza talks about his second-round finish over Matt Brown in Florida.

Bantamweight up and comers Song Yadong and Marlon Vera put on an exciting three-rounder at featherweight that was ultimately won by Song via unanimous decision.

The dead-even matchup lived up to expectations in the first round, with both fighters having their moments of success in an opening five minutes that was tough to call. The pace got even higher in the second, with Vera staying busy while the harder shots were clearly coming from the fists of Song. With a minute left, the two delivered an extended – and even – exchange, but the biggest punch of the round was a body shot by Song delivered late in the frame.

Vera scored the first takedown of the fight early in round three, a big scoring move in a close fight. In the second minute, Song got back to his feet and resumed throwing and landing hard punches upstairs. Vera got another takedown with a minute left, but Song rose almost immediately, only to hit the deck again as Vera kept the pressure on until the end of the bout.

Krzysztof Jotko made it three straight in his middleweight bout with Eryk Anders, winning a unanimous decision.

Jotko’s stick and move strategy worked well for him in the first round as he was largely able to keep Anders at the end of his punches. Anders did get a brief takedown and Jotko tried to implement his grappling attack, as well, late, but the story of the round was Jotko’s solid work on the feet.

Anders did his best to make it a physical fight at close range, and when it got there he had success, but at distance, it was still Jotko turning in the better work, and it was more of the same in the third, allowing the Poland native to leave the Octagon with a hard-fought win.

Dan Ige’s sixth straight win was his toughest and one of his most impressive, as he won a hard-fought split decision over debuting featherweight Edson Barboza.

Ige aggressively chased Barboza with an effective punching attack as the fight opened, but after taking a few shots, Barboza dropped his foe with a right hand. Ige weathered the follow-up barrage and got back to his feet, going right to work again with his strikes. Barboza eventually started getting his kicking game in gear, and his punches upstairs cut Ige and staggered him briefly.

Continuing to get in Barboza’s face, Ige came out swinging in round two, and while he took a couple kicks for his trouble, he was undeterred. A right hand midway through the round rattled the now bloodied Barboza, but only for a second, as he kept firing vicious kicks at the Hawaiian. In the final minute, the fight went to the mat, Barboza throwing several hard strikes from the top position.

Barboza seemed to finally slow Ige down in the final round, but with 1:15 left, it was Ige scoring a big takedown that allowed him to get some strikes off as he kept the Brazilian trapped against the fence.

No. 6-ranked strawweight contender Claudia Gadelha and Angela Hill put on quite a scrap in the co-main event, with Gadelha eking out a three-round split decision victory.

The first round was a big one for Gadelha (18-4), as she showed off an evolving striking attack early on and then took Hill (12-8) down and worked her ground game in the final 90 seconds of the frame.

A minute into round two, Hill dropped the bloodied Gadelha with a right hand, then allowed the Brazilian to get up in order to keep the fight standing. Gadelha soon had her legs back, and while Hill controlled the action for much of the round, Gadelha began landing more flush shots in the closing stages, only to see Hill rally before the horn sounded.

There was little to separate the two 115-pounders in an action-packed third round, with each getting in more than their share of shots over the final five minutes. But when the judges’ scores were tallied, it was Gadelha getting the nod via scores of 29-28 twice and 28-29.

On an emotional night in Jacksonville, Walt Harris stepped into the Octagon for the first time since the tragic death of his daughter Aniah last fall, and while he nearly stopped veteran heavyweight contender Alistair Overeem in the first round, in the second, “The Demolition Man” came back to stop Harris just minutes before his 40th birthday.

The aggressor from the start, Alabama’s Harris dropped Overeem in the second minute and nearly finished the fight on the mat, bloodying the veteran. Overeem survived, though, and moments later he was able to get Harris on the canvas. On the mat, Overeem fired off strikes as he pinned Harris against the fence until the closing seconds of the frame.

After a tactical start to round two, a right head kick followed by a left hand by Overeem sent Harris to the deck. The Netherlands product followed Harris to the mat and let go with more strikes as he flattened his foe. Ultimately, with Harris not firing back, referee Dan Miragliotta had seen enough, halting the bout at 3:00 of the second round.

Alistair Overeem breaks down his win over Walt Harris in Florida.