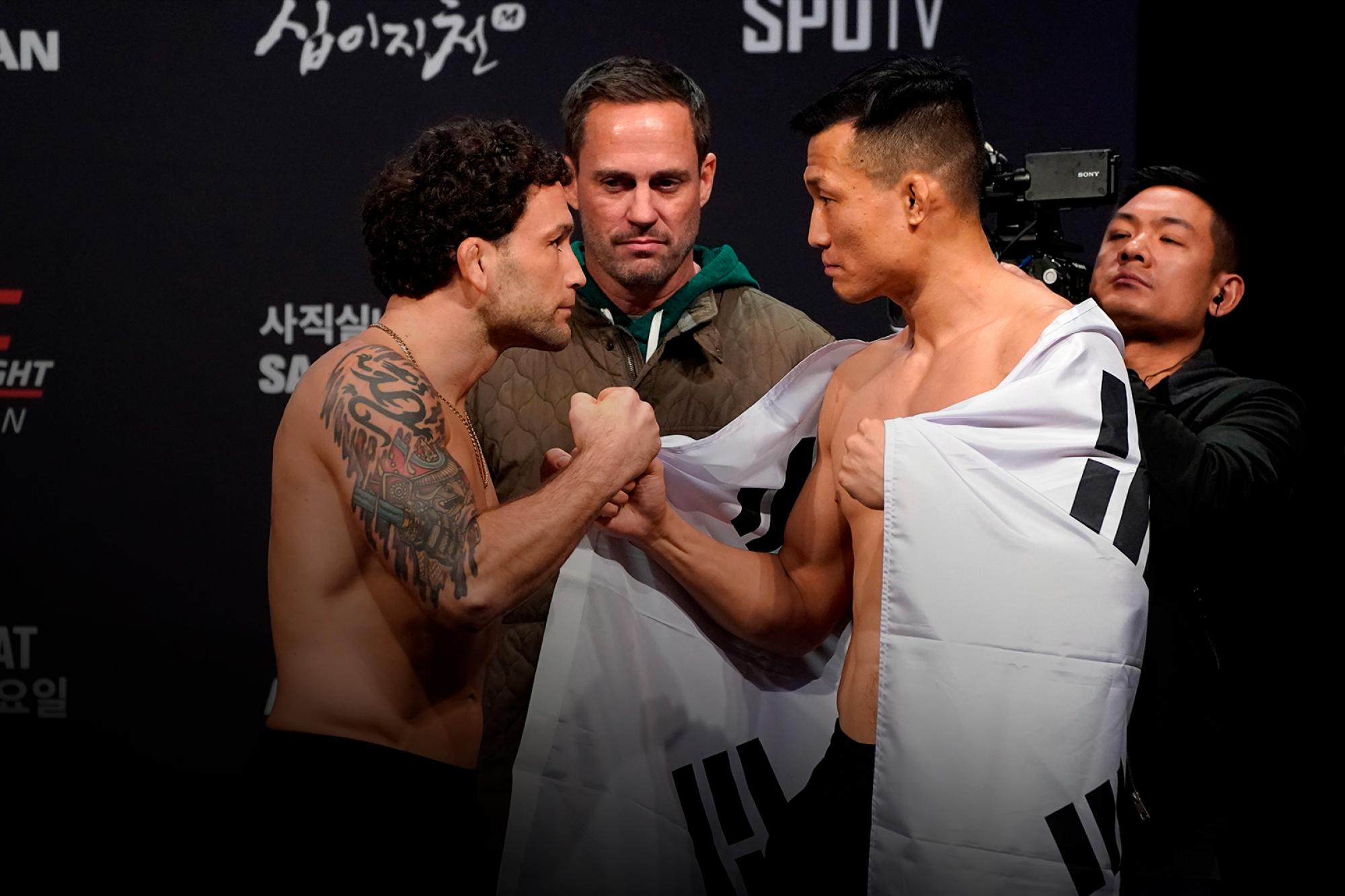 The fight got off to a fast start and stayed there, with Benoit using solid body work to take the first round as he marked up his foe, but AlatengHeili roared back in the second with stiff right hands that bloodied the Texan’s nose. With the fight up for grabs in the third, AlatengHeili switched things up with groundwork that ultimately won him the round and the fight.

Social Post
Amanda Lemos def Miranda Granger via submission due to a Rear Naked Choke at 3:43 in Round 1

Back in action for the first time since July 2017, Brazil’s Amanda Lemos removed Amanda Granger from the ranks of the unbeaten via first-round submission.

Getting the fight to the mat in the second minute, Lemos stayed busy as she worked for a submission, and when she got a rear naked choke locked in, it was a matter of moments before the fight was over, as referee Greg Kleynjans called a stop to the bout at 3:43 of the opening frame.

Amanda Lemos secures the rear naked choke to get the win in Busan.

Nurmagomedov started off fast, throwing and landing a varied array of strikes that included several spinning attacks as Barcelos tried to close the distance, but to no avail. In the second, though, Barcelos’ leg kicks slowed Nurmagomedov down enough that he was able to get a hold of him and attempt to implement his grappling game. And while the Brazilian didn’t get Nurmagomedov down, he did control a large portion of the round from the back position, and it was Barcelos’ ground game that broke open a close third frame that pushed him over the top and earned him a hard-fought victory.

Social Post
ALEXANDRE PANTOJA def Matt Schnell by KO at 4:17 in Round 1

A highly anticipated flyweight bout between Alexandre Pantoja and Matt Schnell delivered on the hype for as long as it lasted, but it was the Brazilian putting a stamp on the bout with a first-round knockout of Schnell.

Toe to toe exchanges kicked off the fight, with Pantoja scoring a flash knockdown but Schnell getting his shots in as well.  In the second minute, Schnell returned the favor when he rocked Pantoja, but the Brazilian shook it off before the fight went to the mat. Soon, the fight returned to the feet, and after more heated back and forth, it was Pantoja drilling Schnell with a right hand that sent him face first to the mat. Schnell tried to rise, but two more rights ended the bout, with referee Marc Goddard stopping the fight at the 4:17 mark.

The fight went to the mat in the second minute with Morales in control on top, but Ma stayed busy, nearly locking in a kimura that had the crowd roaring. For his part, Morales landed some ground strikes, but nothing that drastically altered the trajectory of the fight.

Both fighters got their shots in during round two, and neither threw range-finders either, as every blow was designed to end the bout.

Ma came out fast for the final round, but it was Morales landing the most telling shot as he dropped the hometown favorite with a spinning wheel kick two minutes in. Ma shook off the effects of the blow but now had to fight off his back. Unable to turn things around on the ground, Ma had one last chance on the feet in the closing seconds but the horn intervened.

The third time was the charm for SeungWoo Choi in featherweight action, as he earned his first UFC victory via unanimous decision over Suman Mokhtarian.

Choi got off to a good start with his striking both at range and in close, but a couple fence grabs prompted referee Greg Kleynjans to dock him a point. When the bout resumed, Choi went back on the attack, making sure that the docked point wouldn’t cost him too much.

The onslaught continued in the second, with Choi scoring with a barrage of strikes against the fence before dropping Mokhtarian. Mokhtarian appeared to still have his wits about him on the mat as he looked to work from his back, but he was unable to get any offense going. With a minute left, the fight was back on the feet and Mokhtarian was showing the wear of the battle on his face, but he made it out of the round.

Choi took an inadvertent poke to the eye early in round three, but he was cleared to continue and it was back to work. Just before the midway point, Mokhtarian got some daylight and briefly rocked Choi, but a subsequent takedown ended up with Choi in the top position and it was the Gangneung product dominating down the stretch.

Rising heavyweight star Ciryl Gane closed out the preliminary portion of the UFC Busan card with a three-round unanimous decision over Tanner Boser.

Both heavyweights displayed impressive footwork in the first five minutes, but when it came to offense, it was Gane clearly landing the better shots as the two remained standing.

Early in the second round, Gane bloodied his foe and midway through, a left hand rocked the Canadian. Boser shook off the blow, and while the cut around his eye was bothering him, he stayed busy, refusing to back down from the Frenchman.

The third clearly belonged to Gane, and while Boser’s toughness was undeniable, he was unable to hold off the charge of the unbeaten prospect, who improved to 6-0 with the 30-26 on all scorecards win. Boser falls to 17-6-1.

Kang controlled the first round on the mat, keeping the bout there for much of the frame thanks to two takedowns. After a brief standup exchange to begin round two, it was back to the mat for the bantamweights, Kang in the top position, and “Mr. Perfect” continued to dominate, as Liu was unable to get to his feet or mount any significant offense. And while Liu had some success staying upright early in the third round, the rest of the frame belonged to Kang on the mat despite suffering Liu opening up a cut on him with an elbow late.

In a competitive first round, it was Park edging it out thanks to a couple crisp uppercuts and a brief takedown midway through the frame. The pattern continued over the next rounds, as well, with Barriault not consistent with his offensive output and Park doing just enough to stay a step ahead with his standup and grappling attacks.

Social Post
DA-UN JUNG def Mike Rodriguez by KO at 1:04 in Round 1

A feeling-out process between the two didn’t last long, as Jung stepped in with a right hand that put Rodriguez on the mat. The New Englander tried to recover, but the follow-up shots from Jung prompted referee Marc Goddard to step in and halt the fight.

Social Post
CHARLES JOURDAIN def Dooho Choi by TKO at 4:32 in Round 2

Choi fought patiently in the opening round and it worked well for him during most of the frame, as he wobbled Jourdain with a left hand two minutes in and then dropped him midway through the round with a right upstairs. Jourdain still seemed to be wobbly on his legs once he rose, but he kept throwing, and in the closing seconds of the frame he put Choi on the deck with a left hand.

Jourdain stayed busy in the second, with his jab being particularly effective, and while Choi would get his respect with sharp counters, the Quebec native would not be denied, and after putting Choi down again with a left hand, he closed the show with ground strikes that prompted the stoppage by referee Peter Hickmott at 4:32 of round two.

Rakic came out firing and transitioned right into a guillotine choke, but Oezdemir pulled free and battled his foe in the clinch before the two broke loose. A hard kick and punch from Rakic followed, and it was clear that the Vienna product was seeking an early night. With just over two minutes left, Rakic scored a takedown but Oezdemir got up quickly and exchanged close-range punches with his foe.

Oezdemir dug in with kicks in the second round, swelling up Rakic’s lead left leg. Rakic stayed busy at range and in the clinch, apparently unbothered by the kicks, but Oezdemir’s pressure and activity level remained steady in the middle five minutes and in the final frame, proving to be the deciding factor in the bout.

Social Post
CHAN SUNG JUNG def Frankie Edgar by TKO at 3:18 in Round 1

Fighting at home in South Korea for the first time since 2008, Seoul’s Korean Zombie, Chan Sung Jung, thrilled his fans at Busan’s Sajik Arena, stopping Frankie Edgar in the first round to put himself squarely in the featherweight title race.

Jung patiently waited for an opening as the fight began, and after he avoided a takedown, he found it, stunning Edgar with a short left upstairs before dropping the former lightweight champion moments later. Jung moved in for the finish and took Edgar’s back, and while the New Jersey native was able to stay active enough to avoid the finish and get back to his feet, the bloodied battler was still on unsteady legs, and after a second knockdown, referee Marc Goddard had seen enough. The official time of the stoppage was 3:18 of round one.