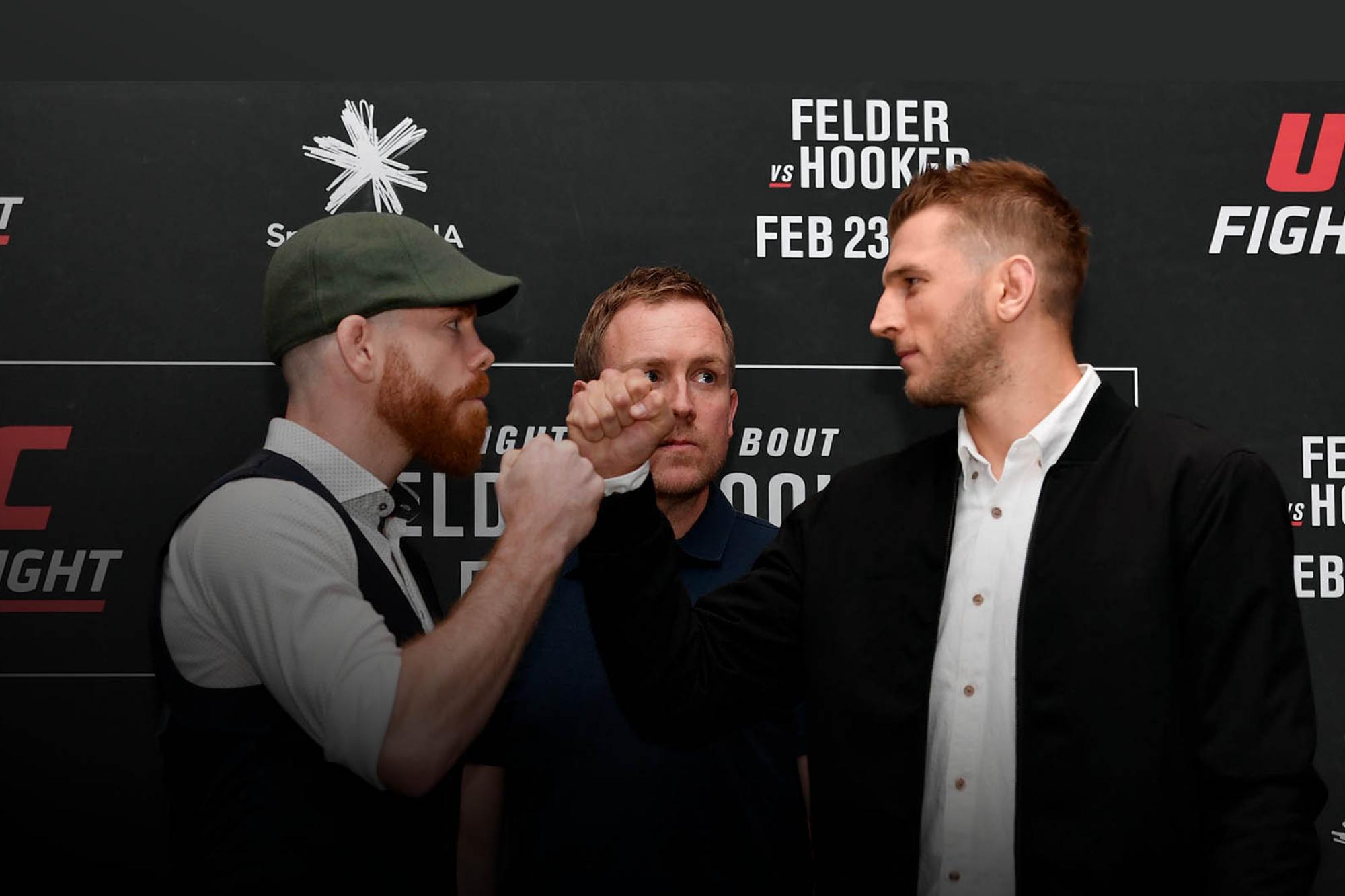 After a rough start to her UFC career, Priscila Cachoeira finally got into the UFC win column in impressive style, as she stopped Shana Dobson in the first round of their flyweight opener.

A slugfest broke out seconds into the fight, but just when things appeared to be settling down, Cachoeira landed a flush right uppercut that put Dobson on the deck. A moment later and referee Neil Swailes had halted the bout. The official time was :40 of round one.

Fighting for the sixth time in less than a year, Angela Hill earned her third consecutive win, beating Loma Lookboonmee via unanimous decision in strawweight action.

Hill got off to a fast start, staying busy behind stiff jabs and solid right hands that didn’t hurt Lookboonmee, but did score points. Add in a late takedown and it was a good round for “Overkill.”

As close as the first was, the second may have been closer, with Lookboonmee getting on the takedown board while continuing to score with kicks to the body and leg. Hill kept the heat on with her strikes upstairs, and even while on the mat she stayed busy, looking for submissions until the two rose.

The third remained competitive, but the more telling strikes were landed by Hill, allowing her to take the round and the victory.

The standup action was technical and crowd-pleasing in the opening round, with Kara-France busy throughout while Nam looked to land the fight-altering bomb. A left hook late did get Kara-France’s attention, but the Aucklander stayed cool and stayed busy in the second round. Nam’s forward pressure was working well for him, though, and he began getting closer to his bloodied foe. And though Nam remained aggressive in the third, it was Kara-France’s volume striking attack that made the difference when the identical scores of 30-27 were read.

Chinese welterweight standout Song Kenan was in top form in his bout with Australia’s Callan Potter, stopping his foe in the first round.

Going into the fight, it was expected that Song’s power would be the difference, and it was, and once he rocked Potter with a left hook, it was the beginning of the end. Potter gamely tried to slug his way out of trouble, but Song kept landing, with a right hand putting the Victoria product on the deck. Referee Neil Swailes had then seen enough, stopping the bout at 2:20 of the opening round.

Jake Matthews moved to 5-1 in his return to welterweight, holding off a late charge from Emil Meek to win a three-round unanimous decision.

Matthews got a takedown in the opening minute but Meek didn’t stay there long, putting the fight back where he wanted it. Or so he thought, as Matthews dropped him hard to the mat with a left uppercut midway through the frame before taking over again with his ground game.

Continuing to use accurate strikes to set up takedowns, Matthews nullified any offensive attempts from Meek, and a minute into round two, he had his foe’s back. With less than two minutes left, Meek rose but ate some more hard shots before getting put on his back once again.

As Matthews tired, Meek surged in the third round, but the Aussie’s defense and a late takedown ensured that the local fan favorite emerged victorious via three scores of 29-28.

The second down under visit of lightweight prospect Jalin Turner resulted in another finish, as he stopped late-notice newcomer Josh Culibao in two rounds.

Fighting above his normal weight class at featherweight due to the short-notice call, Culibao came out ready to fight, but the first was Turner’s round on the feet as well as the mat, where he nearly sunk in a guillotine choke.

In the second minute of round two, Culibao began limping after twisting an ankle and Turner went on the attack, first with another choke, then with ground strikes on the mat. Culibao’s heart kept him in the fight for a while, but ultimately the unanswered strikes prompted referee Mark Craig to halt the bout at 3:01 of the second stanza.

With the win, Turner moves to 9-5. Sydney’s Culibao, who replaced Jamie Mullarkey, falls to 8-1.

Zubaira Tukhugov’s first win since December 2015 was a big one, as he halted Kevin Aguilar in the first round of their featherweight bout.

The two 145-pounders took their time to get acclimated to the Octagon and each other, but once Tukhugov struck with a left hook, he made it count, with Aguilar trying unsuccessfully to get his footing. A series of uppercuts and hooks sent Aguilar to the deck, and a barrage of follow-up shots ended the bout, with referee Marc Goddard stopping the bout at 3:21 of the opening frame.

Auckland’s Brad Riddell had the crowd roaring for 15 minutes and he delivered a victory to them, as he won a hard-fought three-round split decision over Magomed Mustafaev in their lightweight bout.

Mustafaev struck first with a body kick, but Riddell answered with a right hand that dropped the Dagestan product. Mustafaev shook off the effects of the blow and got back to his feet, where he implemented his grappling attack with a series of quick takedowns. Riddell never stayed grounded for long, but Mustafaev wouldn’t let him get free, either, with the local favorite only breaking loose in the closing seconds of the opening round.

Mixing his striking and grappling better in the second, Mustafaev was able to keep Riddell from getting into any rhythm, but Riddell was still landing enough shots to keep the crowd in the fight and Mustafaev from running away with the fight.

In the third, a bloodied Riddell kept pressing, doing whatever was necessary to make the action while Mustafaev relied on his grappling with little to show for it, making it a key in the judges’ final verdict.

There was no feeling out process between the two big men, with each strike thrown having the potential to end the fight. It was de Lima who struck paydirt, though, with a right hand sending Sosoli down to his knees. A left hand followed and referee Neil Swailes had seen enough, with the end coming at 1:28 of the opening round.

China’s Yan Xiaonan moved to 5-0 in the UFC and likely earned a spot in the strawweight top 15 with a shutout three-round decision win over former world title challenger Karolina Kowalkiewicz.

Yan controlled the action from the start, throwing plenty of punches before turning the tables on Kowalkiewicz during a takedown attempt. After a brief spell on the mat, Yan put the fight back on the feet and went right back to work, while Kowalkiewicz was having issues with her right eye. In the final minute, Yan put the fight back on the mat briefly, capping off a dominant round.

After a visit from the Octagonside physician between rounds to check the eye, Kowalkiewicz was cleared to continue, but Yan kept the pressure on. Kowalkiewicz had some success in the clinch against the fence, but only in keeping Yan from implementing her offense. After they broke, Yan closed the distance and threw her opponent to the mat, and once standing, it remained all Yan.

Game to the end, Kowalkiewicz tried to turn things around in the third round, but Yan was not allowing any comebacks, making the final result a mere formality.

In a co-main event pitting two top young light heavyweights against each other, it was Australia’s Jimmy Crute dominating Poland’s Michal Oleksiejczuk en route to a first-round submission victory.

The 23-year-old Crute implemented his grappling attack immediately, putting the 25-year-old Oleksiejczuk on the deck several time before keeping him there for an extended spell with two minutes remaining. While there, Crute went for his foe’s arm, locked it up, and the tap out to the kimura followed, with the end coming at 3:29 of the opening frame.

Dan Hooker and Paul Felder talk after their split decision war in Auckland.

Lightweight contenders Dan Hooker and Paul Felder were expected to deliver the goods in the UFC Auckland main event at Spark Arena, and that’s exactly what they did in a memorable five-round war that saw Hooker emerge with a split decision victory that propels him further up the list of elite 155-pounders.

As for Hooker’s rival for five rounds, he may have made his last walk to the Octagon.

“This might be it for me,” said an emotional Felder, who cited being away from his four-year-old daughter for his leaning towards retirement. That’s a final decision for another day, though. For today, fans will celebrate a fight to remember between two of the best in a stacked division.

After refusing Felder’s offer to touch gloves, Auckland’s own Hooker got right down to business with a series of kicks to the calf as he used movement and range to keep his foe at bay. With two minutes left, Felder landed a hard left hook, putting him on the board, but Hooker took it well and kept using lateral movement to his advantage. As the round wound down, Hooker locked Felder up against the fence briefly, and then it was back to sticking and moving as Felder marched forward.

Felder was showing damage to his right eye after the opening frame, prompting him to show even more urgency to get inside on Hooker, who calmly stuck to his game plan in response. In the second minute, Felder did well in exchanges, only to have Hooker lock him up for a spell until the two separated. Felder proceeded to work his kicking game in the closing stages of the round, but Hooker upped his work rate, leading to some more heated exchanges.

The already compelling action heated up in the third round, with Felder beginning to land more and more shots to the head and legs while Hooker was now marked up on his face but still throwing and landing as the fight began to approach the championship rounds.

Felder was throwing bombs to start the fourth frame, and he landed several on Hooker, rocking him briefly in the second minute. Hooker responded with a takedown attempt, but when that came up short, he settled for a brief clinch against the fence. The two broke briefly, then locked up again, Hooker in control until they separated. Felder went on to land a pair of hard right hands, but Hooker wasn’t budging. Hooker went back to his clinch game in the final minute, but Felder wouldn’t give him the takedown, sending the fight to a fifth round.

Starting off strong, Felder continued to tag Hooker in the fifth, prompting another grappling sequence from Hooker, but after they broke, “The Hangman” went back to his striking attack, with every blow pivotal for each man. A takedown by Hooker with a minute left caused the crowd to erupt for their fighter, and as the two scrambled for position, there were more roars from the packed house, and they lasted through the final horn, when the two rivals shared a hug that could only be earned by 25 minutes of battle.