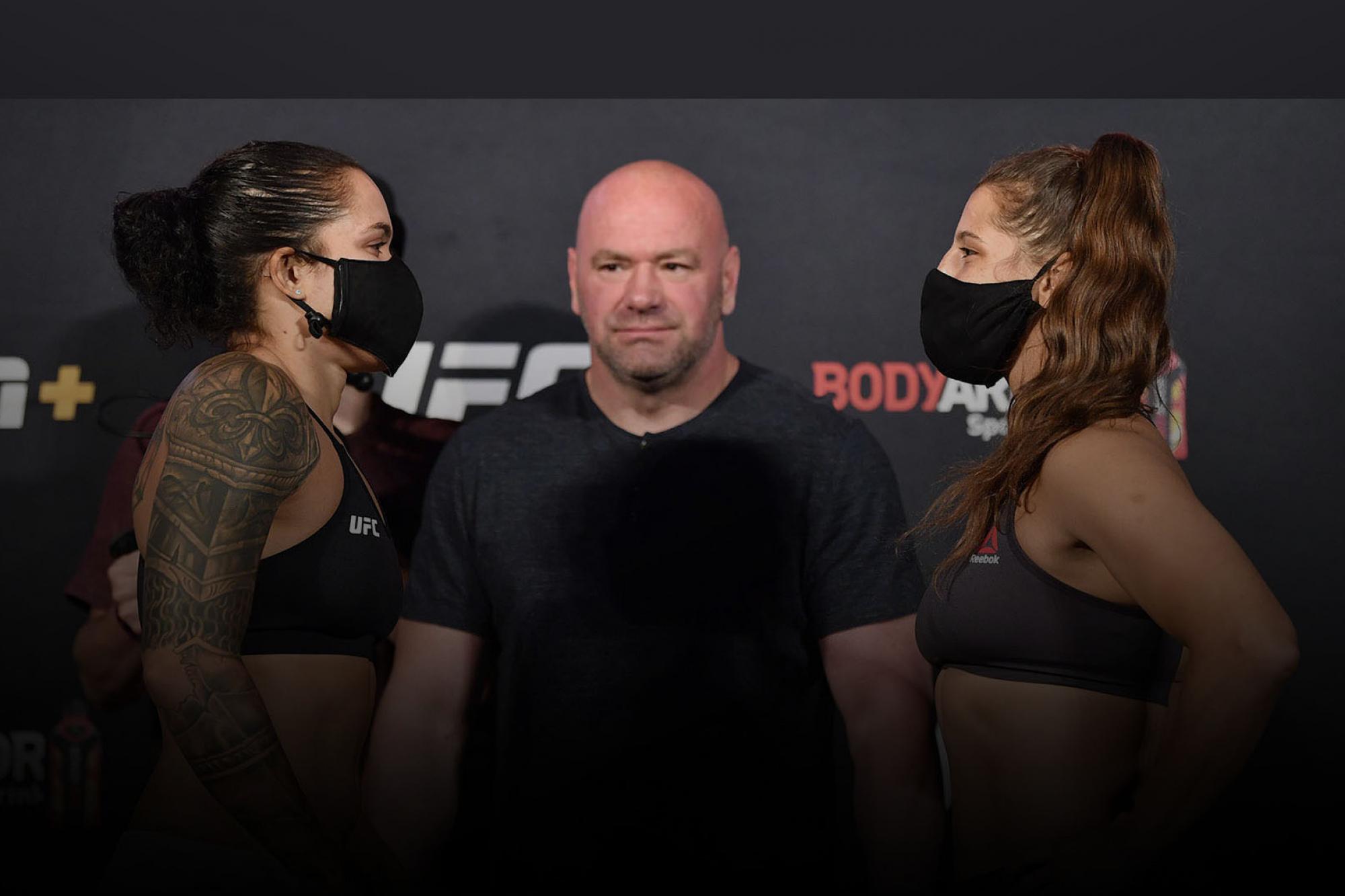 All The Big Winners From The UFC Apex In Las Vegas, Nevada
By Thomas Gerbasi, on Twitter: @TGerbasi • Jun. 6, 2020

Brazil’s Herbert Burns continued to impress in the 150-pound catchweight opener, as he spoiled the comeback of Evan Dunham via first-round submission.

Dunham landed a couple sharp punches in the opening minute but got taken to the mat for his trouble, with Burns immediately taking his back. Moments later, “The Blaze” smoothly sunk in a rear naked choke, forcing the tap out at the 1:20 mark of round one.

Clark shot for a takedown immediately, but didn’t get it, with the two ending up in a clinch against the fence. After a spell at close quarters, Menifield hurt Clark with a right hand, but once the “Brown Bear” shook off the blow, he landed a couple hard shots before Menifield went back on the attack. Clark’s left eye was bruised up from the earlier right hand, but as the round progressed, he was doing the better work as Menifield began to tire.

As fatigue set in, Menifield’s punches were getting slower and wider, but they still packed plenty of power. Regardless, Clark, now bleeding from the mouth, was still tagging his foe, and it was Menifield initiating the clinch sequences.

In the third round for the first time of his career, Menifield was clearly feeling the grueling pace, but he was still working, as was Clark, who scored a takedown just before the midway point of the round. After a minute on the deck, Menifield got back to his feet and the clinch work resumed until the two separated in the closing seconds and traded to the horn.

In a clash of flyweight contenders, Alex Perez made a statement to the fighters at the top of the division as he stopped Jussier Formiga in the first round.

Perez got to work as soon as the fight began, and he didn’t stop going, peppering Formiga with punches upstairs as well as thudding kicks to Formiga’s left leg. The kicks ultimately took their toll on the Brazilian, who was dropped to the mat with a little over a minute to go in the round. Formiga gamely got to his feet, but when he was sent to the canvas a second time by a leg kick, refereer Keith Peterson had seen enough, halting the bout at 4:06 of the opening frame.

Maki Pitolo scored his first UFC victory in his second try, stopping Charles Byrd in the second round of their middleweight bout.

After a brief standup sequence, the two 185-pounders spent the rest of the round grappling on the mat, trading slams and control in a close frame.

Byrd came out fast for round two, but Pitolo was patient, using quick strikes to build momentum, and after a barrage of body shots and elbows, the Hawaiian took Byrd down and opened up with unanswered ground strikes, bringing in referee Herb Dean to stop the fight at 1:10 of round two.

Fighting less than two weeks after the sudden death of his 18-year-old brother, Cody Stamann delivered a performance Jacob would have been proud of, as he shut out Brian Kelleher in a featherweight bout.

Stamann had a solid first round as the two stayed on their feet for the first five minutes. And though Kelleher had his moments, it was Stamann showing the crisper striking and air-tight defense.

The Michigan native kept the pace high in the second, and while Kelleher got closer, a takedown and some ground strikes by Stamann with under two minutes remaining likely locked up the round for him.

Refusing to go away, Kelleher put a lot of pressure on Stamann in the third, but “The Spartan” would not be denied as he continued to stay focused as he put the victory together.

On the heels of a two-fight losing streak, middleweight contender Ian Heinisch promised that “The Hurricane” was coming back against Gerald Meerschaert, and he lived up to his words as he halted his foe in the first round.

Heinisch opened up with hard leg kicks, but it was a right punch upstairs that put Meerschaert on the deck and began the closing sequence, as a barrage of ground strikes led referee Chris Tognoni to stop matters at 1:14 of round one.

Alex Caceres used all his veteran experience to remove Chase Hooper from the ranks of the unbeaten in featherweight action, with a unanimous decision win the result for “Bruce Leeroy.”

Caceres (16-12, 1 NC) dropped the 20-year-old Hooper with a right hand in the first minute, and while “The Dream” got back to his feet, it was only to eat some more hard shots from the veteran. At the three-minute mark, Hooper (9-1-1) locked up with Caceres in search of a takedown, but came up short. Caceres had more success with his attempt late, as he took Hooper to the mat.

Keeping a step ahead in the second, Caceres continued to control the standup action, but when he went to the mat with his foe, Hooper had moments of daylight, albeit brief ones. The third was more of the same, with Caceres cruising to the victory via identical scores of 30-27.

Wineland landed the first significant punch of the fight, a right hand upstairs in the second minute, but O’Malley took it well and drilled Wineland with a right hand a minute letter. It was a sign of things to come, as another right hand landed flush and knocked Wineland down and out, with no follow-up shots necessary as referee Herb Dean stopped the bout at 1:54 of round one.

Both fighters had their moments in a competitive first round, Martin showing himself to be the stronger battler in the clinch, while Magny’s striking at range paid dividends throughout.

The pace picked up in the second round, Magny using a volume striking attack before Martin tagged him with a right hand, then slammed him to the mat. Magny didn’t stay grounded long, and the rest of the round was again a tough one to call.

With Martin’s gas tank running on empty, Magny put the heat on in the final round, breaking open a close fight to seal the victory on the scorecards

Aljamain Sterling left no doubt in making his case for a shot at the bantamweight title, as he finished Cory Sandhagen in spectacular fashion, ending the bout via submission in the first round.

Sterling tore after Sandhagen as the fight began and quickly got him to the mat and took his back. The New Yorker’s first rear naked choke attempt didn’t hit the mark, but the second did, with the end coming at 1:28 of round one.

Garbrandt put together a disciplined, technical attack in the opening frame, with his kicks to Assuncao’s leg his main weapon as he piled up the points. Assuncao did get in his shots, though, an impressive feat given the gap in speed between the two.

The battle remained close in the second, but a flash knockdown scored by Garbrandt with a little over a minute left was probably going to get him the round before “No Love” made sure there would be no third frame, as a vicious right hand in the midst of an exchange ended the fight immediately at 4:59 of round two.

Amanda Nunes made history again on Saturday night in Las Vegas, as she shut out Felicia Spencer over five rounds in the main event of UFC 250, retaining her featherweight title while becoming the first double-champ in UFC history to successfully defend titles in two divisions while holding both belts.

Nunes tossed aside Spencer’s early rushes with right hands that landed flush, but the challenger took them well as she kept moving forward. Two minutes in, Spencer locked up with Nunes, the champion responding with a toss to the mat. Spencer defended well on the mat as Nunes looked for dominant positions, but “The Lioness” was undeterred as she let loose with hard strikes from the top, cutting her foe with an elbow.

Rounds two and three were just as dominant for Nunes, who had little to worry about in terms of offense from Spencer, who needed to change things up considerably in the championship rounds if she was going to upset the Brazilian.

The fourth was more of the same, though, and while Spencer was game throughout, Nunes was just on a different level on this night, with a surge of strikes and a rear naked choke at the end of round four nearly putting an end to the bout.

Spencer gave it a courageous effort early in the final round, but Nunes was never in trouble as she continued to batter the Canadian and pile up the points en route to a lopsided victory.