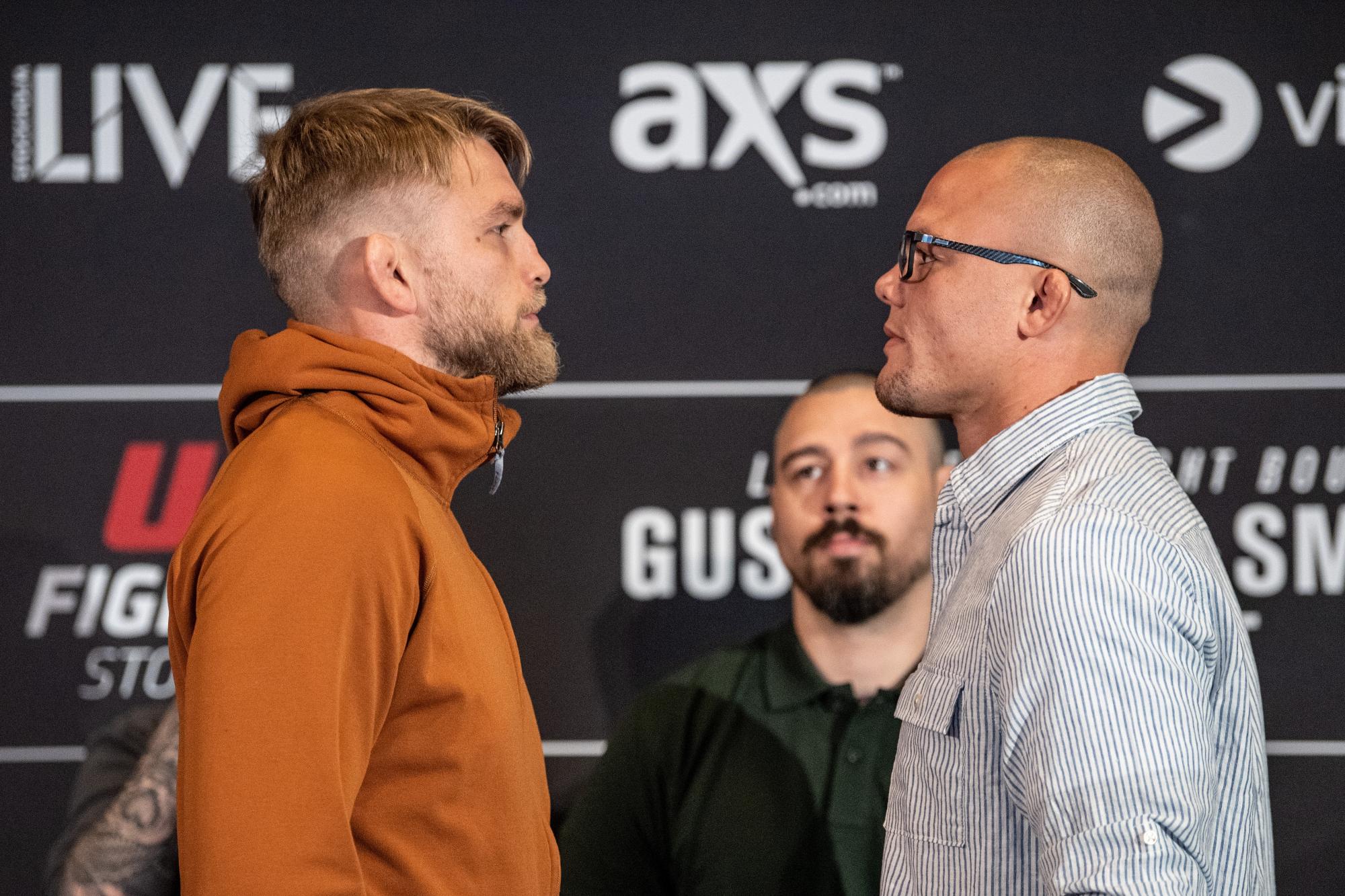 Anthony Smith was supposed to be on vacation now. He’s not.

“You know me,” he chuckles. “I don’t say anything unless I mean it, and I always say, ‘Anytime, anyplace.’”

He does mean it; that’s why he’s in Stockholm, Sweden for a Saturday main event bout against fellow light heavyweight contender Alexander Gustafsson. But after a 13-month stretch that saw him go from middleweight prospect to light heavyweight title challenger over the course of five fights, Smith wanted nothing more than a break to spend with his lady, Mikhala, and their three daughters.

“I didn’t want to take it initially,” Smith admits. “My manager called with the offer on Monday. I got back from the (Jon) Jones fight on Sunday. I hung up on him. (Laughs) Then it was a couple days of him saying, ‘It’s a good opportunity if you want to get back on the horse.’”

Smith had no interest in getting back on the horse, but manager Jim Walter was persistent. Then Mikhala stepped in, wondering if Smith wanted to go back to training camp for a mid-to-late summer return. But the final word rested with “Lionheart,” and all signs pointed to a quick turnaround to battle “The Mauler.”

“I knew that in a few weeks, I’d start getting angry because I turned it down,” he said. “I would have been disappointed in myself and I would have wanted that fight because it’s really about Alex. I want to fight him and I always have. As long as I’ve been in the division I’ve wanted to fight him. That was the call-out I made after the Shogun (Rua) fight. I wanted to fight him and this game is about opportunities and I’m not getting any younger.”

Smith has seized every opportunity presented to him, and this is just the latest. But while some would look at this fight as the perfect way to get back into the title race, the 30-year-old isn’t thinking about belts at the moment.

“It sounds silly, but I haven’t even really thought about the title,” Smith said. “It hasn’t even been on my mind. I just want to go in and perform.”

That’s been the goal ever since the final horn sounded in his fight against Jon Jones on March 2. If we’re talking about opportunities, this was the big one, a chance to parlay his 3-0 light heavyweight record into a world championship against one of the best fighters to ever strap on the gloves. And Smith was confident that he had the style and mindset to get the job done against the odds. But it didn’t happen. And while Smith did go five rounds with the champ, it wasn’t the way he wanted to perform in the biggest fight of his life.

“I think I was too ready,” said Smith. “I just over thought it. It was the biggest moment of my life and it was paralysis by analysis. He didn’t do anything I didn’t expect him to do; I just didn’t do what I was supposed to do in response to it. I don’t know what the hell happened, it was the weirdest s**t. I’ve never had anything like that happen to me before. Obviously I’ve lost fights and had a long career, but I’ve never lost a fight for lack of performance. I left there not even feeling like I fought.”

The Jones fight is still a sore subject with the ultra-competitive contender, but he also has no problem talking about it. And while he takes nothing away from Jones for getting the job done in Las Vegas, it’s clear that he believes that if there’s a second dance with “Bones,” things will look a lot different.

“The only good thing I can take from that is I got a lot of intel on Jon Jones and he didn’t get a whole lot on me,” said Smith, who is asked if he will be cheering hard for former foe Thiago Santos when “Marreta” faces Jones at UFC 239 in July.

“No, not really,” Smith said. “I would rather it be Jon. But I think if Thiago wins, we’re all held up because I think Jon gets an immediate rematch. Honestly, I haven’t even thought that far.”

That’s a conversation for another day. For now, it’s all about Gustafsson, someone Smith has had an eye on ever since he made the move to 205 pounds last year.

“I just like the matchup,” said Smith. “I’m not gonna be some big badass and say I think he’s the best in the division and I want to beat him. Other than Jon, he’s the biggest name in the division and stylistically it’s a good matchup for me. His defensive wrestling is pretty good, he does a real good job of defending takedowns, but his offensive wrestling isn’t there and he’s not a big jiu-jitsu guy; he stays safe for the most part and isn’t throwing up crazy submissions and doing stuff like that from his back. He’s not smash passing people’s guards and doing anything fancy from the top and he doesn’t kick a lot. So stylistically, all the fighters that tend to give me problems are short, stocky wrestlers and tall, lanky kickers, and he’s neither one of those. He’s very good at what he does, but he’s very basic. He’s got good movement, he circles a lot, his angles are good, but he’s primarily a boxer. He’ll kick a little bit from the southpaw stance, but not enough to make a big difference.”

Bottom line, Smith believes this is the best possible way to remind people just who he is. And that’s worth putting off vacation for another week.

“What got me to the dance is I march across the cage and I get in people’s s**t and I swing hammers,” said Smith. “And if they get too close, I’ll drag ‘em to the ground and maul ‘em, and if he gets back up, then I just do it again. That’s what got me here.”

And about that time off?

“I know I keep saying this, but I told my manager that I promised my kids that I wouldn’t fight through the nice weather months,” he laughed, saying that the Smith Clan will be on the road in a camper once the fight’s over and his girls are out of school. Destination unknown.