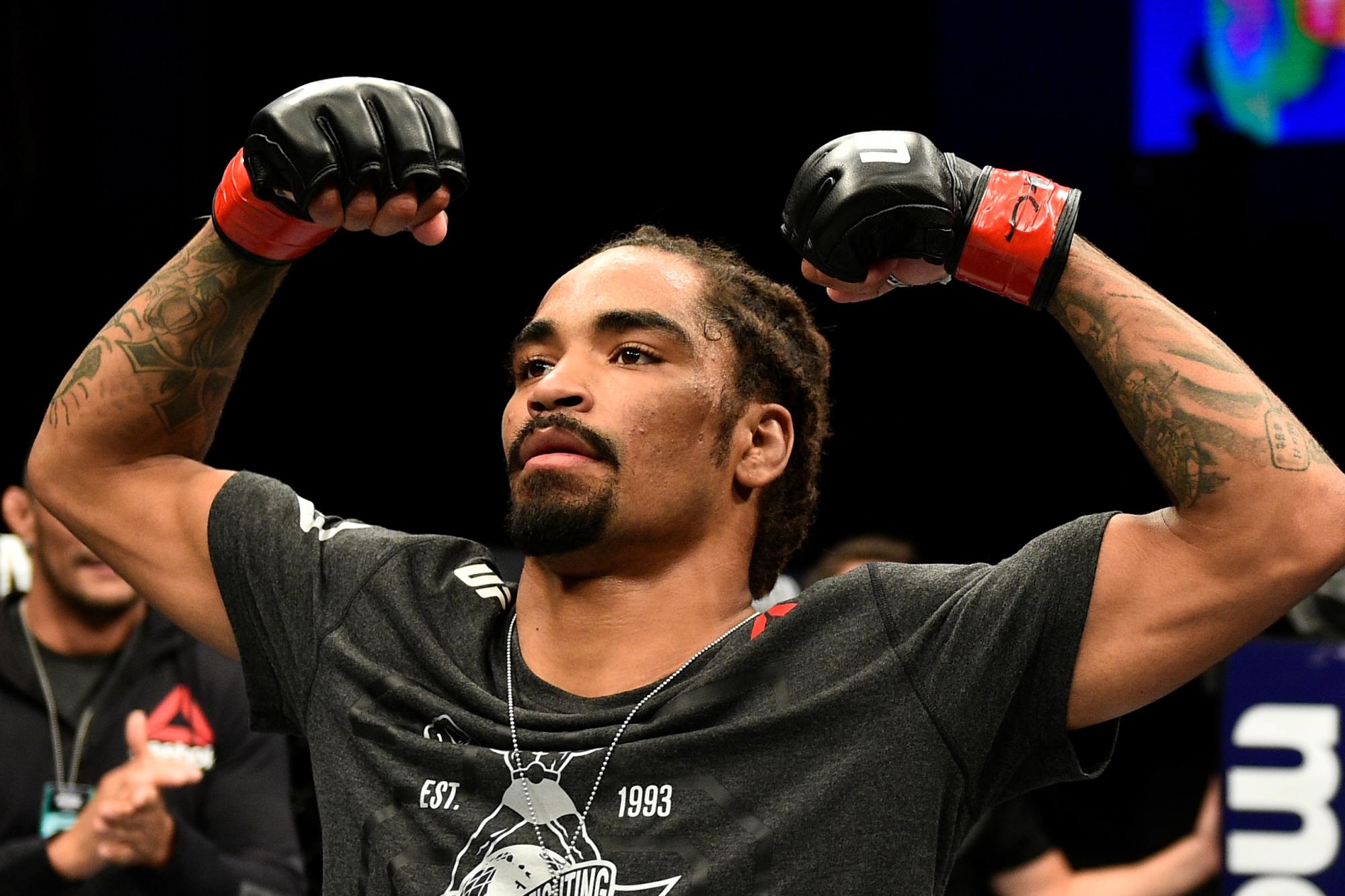 On the Rise: Fort Lauderdale Edition

Saturday's event brings about a chance to get a first look at two promising newcomers and the sophomore appearance of a lightweight with intriguing potential. Here’s a closer look at those three athletes. This is On the Rise: Sunrise Edition.
By E. Spencer Kyte • Apr. 22, 2019

This weekend’s return to Florida has undergone numerous changes, but the overall depth and quality of this fight card has remained the same with every alteration. In fact, you could argue that some of the changes actually made this event even more compelling.

While missing out on a rematch between Yoel Romero and Jacare Souza is disappointing given how competitive and intense their initial clash was at UFC 194 and their current positions in the middleweight division, Romero’s withdrawal opened the door for a new name to attempt to further establish himself as a contender.

Less than a month after submitting David Branch in 49 seconds to earn his third straight victory, Jack “The Joker” Hermansson stepped up to take Romero’s place opposite Souza in a contest that takes on an “Old Guard vs. New Blood” feel in the shifting 185-pound weight class.

Would it have been great to see Romero and Souza run it back? Absolutely, but that fight remains a possibility for the future and now we also get to see if the former Cage Warriors champ who has collected five stoppage wins in his last six starts can topple the perennial contender and inject himself into the title conversation in the middleweight division.

The shifts to Saturday’s event at BB&T Center also bring about a chance to get a first look at two promising newcomers and the sophomore appearance of a lightweight with intriguing potential.

Here’s a closer look at those three athletes.

This is On the Rise: Sunrise Edition. 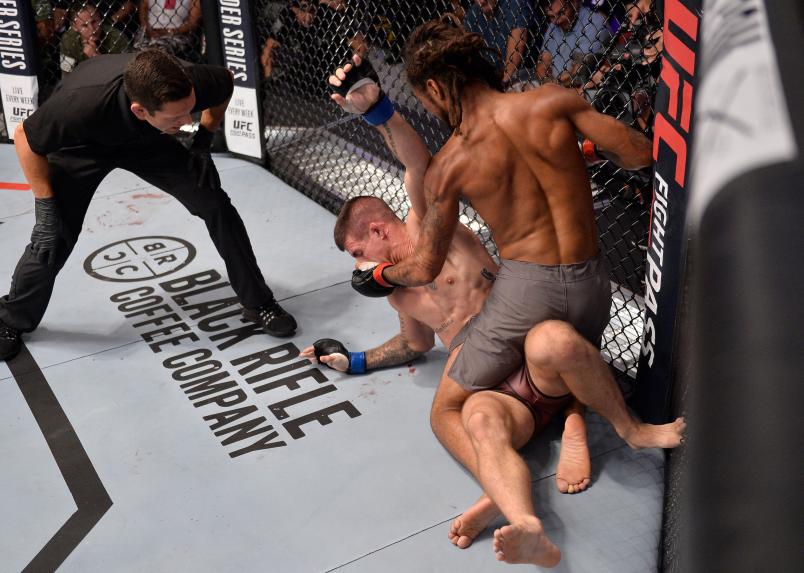 Consider this your final opportunity to get on board the Roosevelt Roberts bandwagon.

While the lightweight division is always flush with talent and the 25-year-old still has a long way to go before reaching contention, Roberts’ efforts on Season 2 of Dana White’s Tuesday Night Contender Series and his initial appearance in the Octagon made it clear that the unbeaten “Predator” has serious upside.

Last summer on the Contender Series, Roberts maintained his perfect record with a second-round submission win over Garrett Gross, and then followed it up with an impressive showing in his first foray into the UFC cage four months later. Paired off with Darrell Horcher, Roberts finished “The Saint” with a standing guillotine choke that brought back memories of Scott Jorgensen’s victory over Chad George at WEC 47.

Boasting tremendous height and length for the lightweight division, the Florida-born Roberts fights with a calmness and patience that belies his age and level of experience. He’s methodical and precise, playing to his strengths and waiting for opportunities to open up to present themselves, rather than over-extending in an attempt to make something happen.

His sophomore assignment against Thomas Gifford kicks off Saturday’s main card and stands as a tremendous opportunity for Roberts to showcase his skills to a wider audience and continue building momentum in the ultra-competitive lightweight division.

An injury to one former Invicta FC strawweight champion opened the door for another to make her UFC debut, as Jandiroba got the call to replace Livinha Souza in a showdown with inaugural UFC strawweight titleholder Carla Esparza this weekend.

The 30-year-old Jandiroba is a perfect 14-0 in her career, with her last three victories coming under the Invicta FC banner.

After earning a handful of quality wins on the Brazilian regional circuit, she was signed by the North American all-female promotion helmed by Shannon Knapp, where she parlayed a first-round submission win over Amy Montenegro into an opportunity to compete for the vacant strawweight title. Originally scheduled to face Janaisa Morandin, a late injury shuffled Mizuke Inoue into the championship bout, which Jandiroba won by split decision. Five months later, she tapped out Morandin to secure her first successful title defense and push her winning streak to 14.

Now “Carcara” gets the opportunity to show that she’s one of the top strawweight talents on the planet by squaring off with Esparza in her UFC debut.

While the inaugural UFC strawweight champion enters on a two-fight skid, she remains one of the most experienced fighters in the division and is more than capable of handing Jandiroba a loss in her first trip into the Octagon. But if the talented Brazilian can continue her winning ways by defeating Esparza, she will immediately inject herself into the thick of the title chase and position herself for another marquee assignment in the second half of the year. 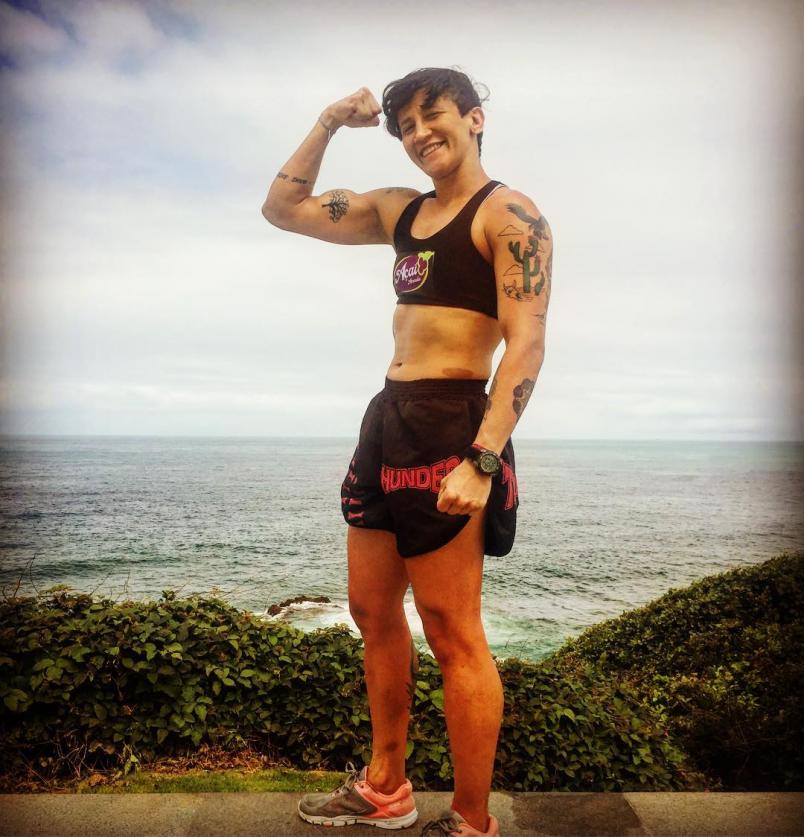 Going into his appearance on the Contender Series last summer, Davis was one of the top emerging talents in the featherweight division and pegged as one of the favorites to secure a promotion to the biggest stage in the sport.

Then he squared off with Sodiq Yusuff and the talented featherweight battered his lead leg with punishing kicks and beat him to the punch in numerous striking exchanges, stealing his thunder and securing a contract for himself in the process. While Yusuff has gone on to earn a pair of wins inside the Octagon, Davis rebounded with a pair of victories under the Island Fights banner, re-affirming his standing as one of the top prospects in the sport.

Wins Some Extra Cash AND Help A Great Cause This Week At UFC Ft Lauderdale!

This weekend, “Beast Boy” steps up in place of Eric Wisely to throw down with grappling ace Gilbert “Durinho” Burns.

A permanent fixture on the fringes of the Top 15, Burns is a major test for the talented Davis in his promotional debut. After coming out on the wrong side of a firefight with Dan Hooker last summer, the Brazilian jiu-jitsu standout rebounded with a lopsided decision win over Olivier Aubin-Mercier and carries a 14-3 record overall into this weekend’s preliminary card pairing.

Much like Jandiroba’s bout with Esparza, this is an immediate opportunity for the 26-year-old Floridian to make a splash in his new surroundings. Burns is a decorated grappler and an experienced UFC lightweight, and a win for Davis would catapult him into the spotlight as one of the top young stars to track in the division.