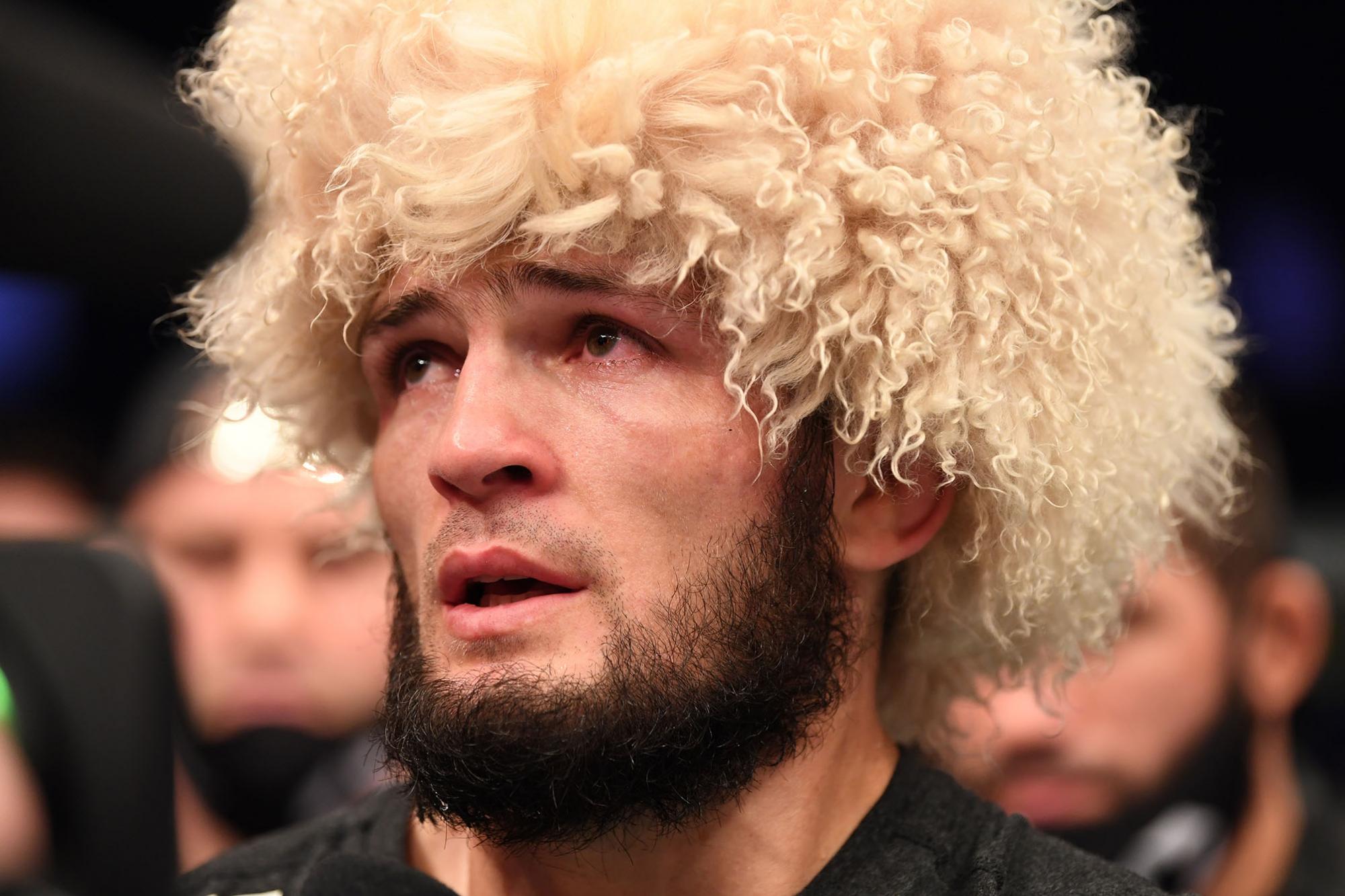 Lightweight Champion Retires With An Unprecendented Legacy Of Dominance
By Zac Pacleb, on Twitter: @ZacPacleb • Oct. 25, 2020

It’s an image that will forever be burned into the minds of the mixed martial arts community – Khabib Nurmagomedov, fresh off submitting Justin Gaethje, curled into a ball and weeping in the center of the Octagon at UFC 254.

The moment was one of rare vulnerability for a champion who almost never had such a moment in his professional career, and the context only added weight to the gut punch of the visual. The fight was the first since Nurmagomedov’s father and coach, Abdulmanap Nurmagomedov, passed away in July due to heart complications worsened by COVID-19.  All that love and pain and grief uniquely known to those who lost a parent too soon - and specifically to those who lost a father figure held with such love and admiration – uncorked itself in Nurmagomedov in that moment, a stunning display after what was another commanding performance. 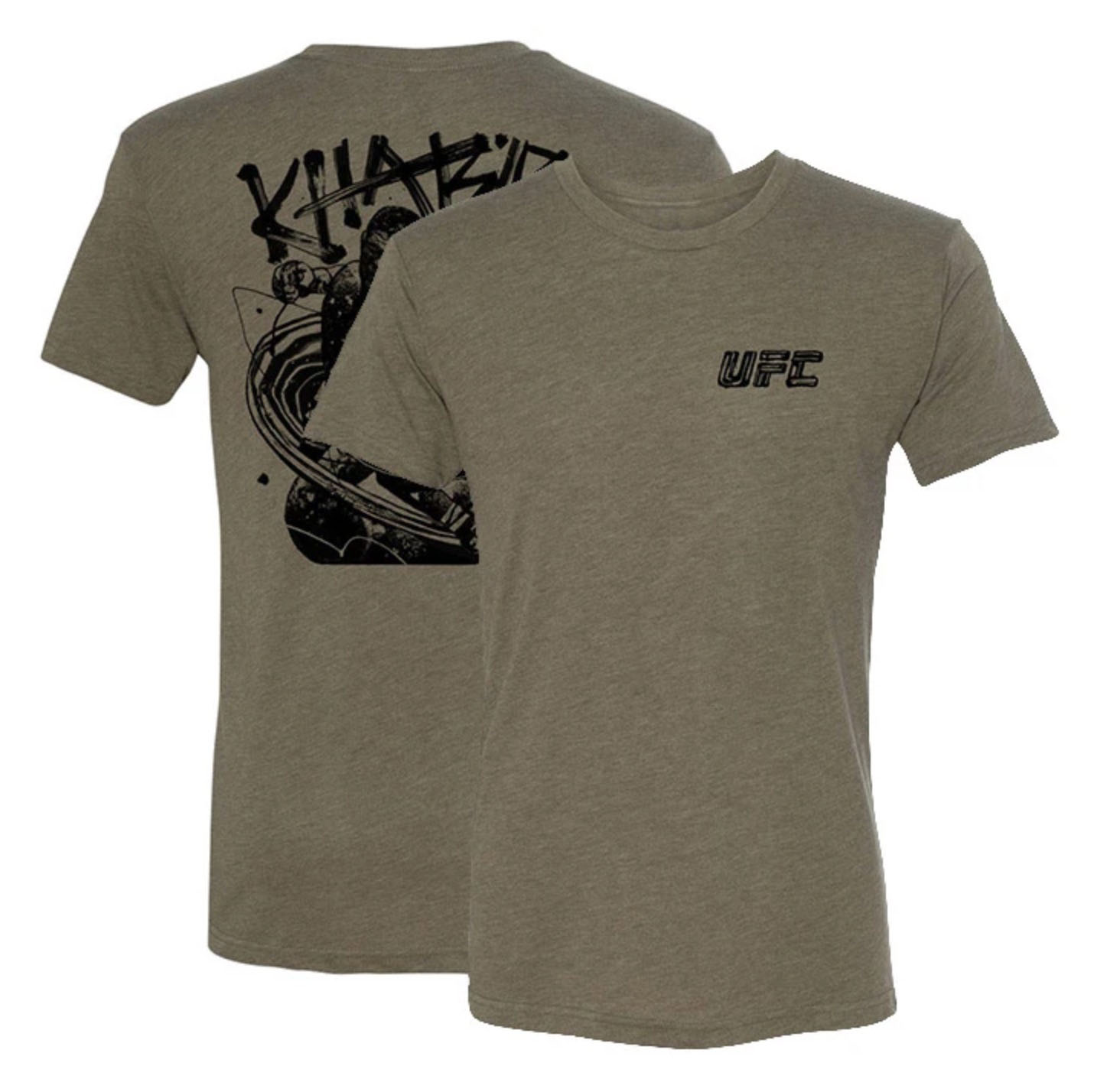 Throughout fight week, Nurmagomedov’s emotions were muted, but anyone who knew anything about him understood the toll his father’s passing took. Abdulmanap was the one who trained and molded this wrecking machine of a fighter, the reason the aura of this sambo master was of such reverence. Nurmagomedov shed the possibility of shouldering that emotional burden again, laying his gloves down on the mat and announcing his retirement from the sport.

Get Your Khabib Gear Now At The UFC Store

“Today, I want to say, this was my last fight,” he said in an emotional Octagon interview.” No way am I going to come here without my father. It was first time, after what happened with my father, when UFC called me about Justin. I talk with my mother three days, she don’t want that I go fight without father. I promised her, it’s going to be my last fight, and if I give my word, I have to follow this. It was my last fight here.”

So, that’s it – a Dagestani-knotted bow on a gift of a career. 29-0. Eleven submissions. Eight knockouts. Three title-defending chokes against Conor McGregor, Dustin Poirier and Gaethje, and the rare sight of an athlete retiring on top.

An era of such dominance begs the sparking of a never-ending debate: Is he the GOAT?

For the sake of indulgence, the fact that Nurmagomedov’s career has very few questions is a feather in his cap. Never was he in any sort of real trouble in a fight, to the point that McGregor winning a single round is considered a point of accomplishment for the Irishman and likely will represent the same for Gaethje, whom two judges granted the first round in their fight.

But in terms of the visual, there was never a Carlos Condit head kick or Matt Hughes submission like Geroges St-Pierre suffered. Nor was there an all-time war against Alexander Gustafsson, a Houdini-like escape from a deep armbar against Vitor Belfort or even a question-riddled decision against Dominick Reyes as Jon Jones experienced. He faced stiffer competition in a more fleshed out division than Demetrious Johnson. Nurmagomedov never got caught in his own web of gamesmanship as Anderson Silva did against Chris Weidman, and he never took a break from the sport to pursue a lucrative boxing exhibition as did Conor McGregor.

The tough part is in his resume. The aforementioned, other than McGregor, hold a great quantity and storied names on their group of victims. The narratives were perhaps stronger, the eyes watching perhaps opened bigger. But it has to be said that Nurmagomedov was so intimidating, making such tackling dummies out of his opponents, that Dana White just could not find a fight for him. Due to this, as well as some injuries, Nurmagomedov didn’t compete from April 2014 to April 2016.

That’s when the run to the mountaintop kicked into gear. A loud return in the form of a second-round TKO over Darrell Horcher sparked title-fight chatter with Eddie Alvarez on top. When the promotion opted for McGregor’s bid to become the first double-champ, Nurmagomedov responded with a terrifyingly powerful submission win over Michael Johnson in which Nurmagomedov could be heard telling Johnson to give up because he knew Nurmagomedov was worthy of a title shot. He earned that shot next, and in a chaotic fight week at UFC 223, he ultimately secured the belt by defeating Al Iaquinta.

So few question marks surround Nurmagomedov’s quality. Yes, there were some issues managing weight cuts, but by the time he earned the belt, he got that part down, and there wasn’t really another true stumbling block in his career. The cursed matchup with Tony Ferguson fell through for increasingly ridiculous reasons, and that might be the only true “what if” lost in this retirement, but in terms of the highest ceiling - the apex of one’s dominance - Nurmagomedov is near, if not at, the mountaintop.

He ascended to superstardom without much of the pomp and circumstance that surrounds many historically popular prizefighters. Though he had several finishes, Nurmagomedov’s style wasn’t necessarily flashy. It didn’t produce viral knockouts. It just produced the look of helplessness in his opponents. Nurmagomedov didn’t really talk trash, either. He would say he would “smash” people, but frankly, it was an accurate description of his fights. Other than a certain incident at UFC 229 that capped an ugly feud, Nurmagomedov exuded respect for his foes and the sport, most notably at UFC 242 when, after swapping shirts with Poirier in a show of respect, he announced he would auction the shirt and donate the money to Poirier’s Good Fight Foundation. In that same interview, Nurmagomedov relished honoring his father, who proudly stood next to him in the Octagon.

Perhaps what adds a certain gravity to this retirement is that he is still in his prime. St-Pierre dubbed his performance against Gaethje as “masterful.” Nurmagomedov looked sharp on his feet, pressuring a man known for high-paced wars before easily sweeping into a triangle choke to close the show. He and his father talked of leaving the sport at 30-0, so this only comes one fight early, and frankly, not many fights of interest were left for him. He mentioned the rumored fight between Poirier and McGregor, saying he wasn’t interested since he “choked them out, both of them.” Fighting St-Pierre even piqued the Canadian’s interest, but that was more to stamp a legacy, and fighting a 39-year-old “Rush” probably wasn’t the fight he truly wanted; that would require a time-machine.

So, Nurmagomedov goes off into the world of the retired, and given his track record, we might not hear a lot from him after this. He wasn’t one to make many media appearances outside of promoting fights, at least outside of Russia. We might see him in the corner for his teammates, but using that as a chance to make his voice heard isn’t really his style. This feels like a true goodbye to a man who made a crater-sized mark in the sport.

Where Nurmagomedov ranks among the greats is up for endless debate among fans, pundits and the like, but his greatness is as undeniable as one of his takedowns. Seeing Nurmagomedov weep on the mat is an image few who saw it will forget, a capstone to a definitively dominant career. “The Eagle” soared high - maybe higher than anyone in the history of the sport for as brief as it was – and now he goes off into the sunset, belt firmly still in hand.