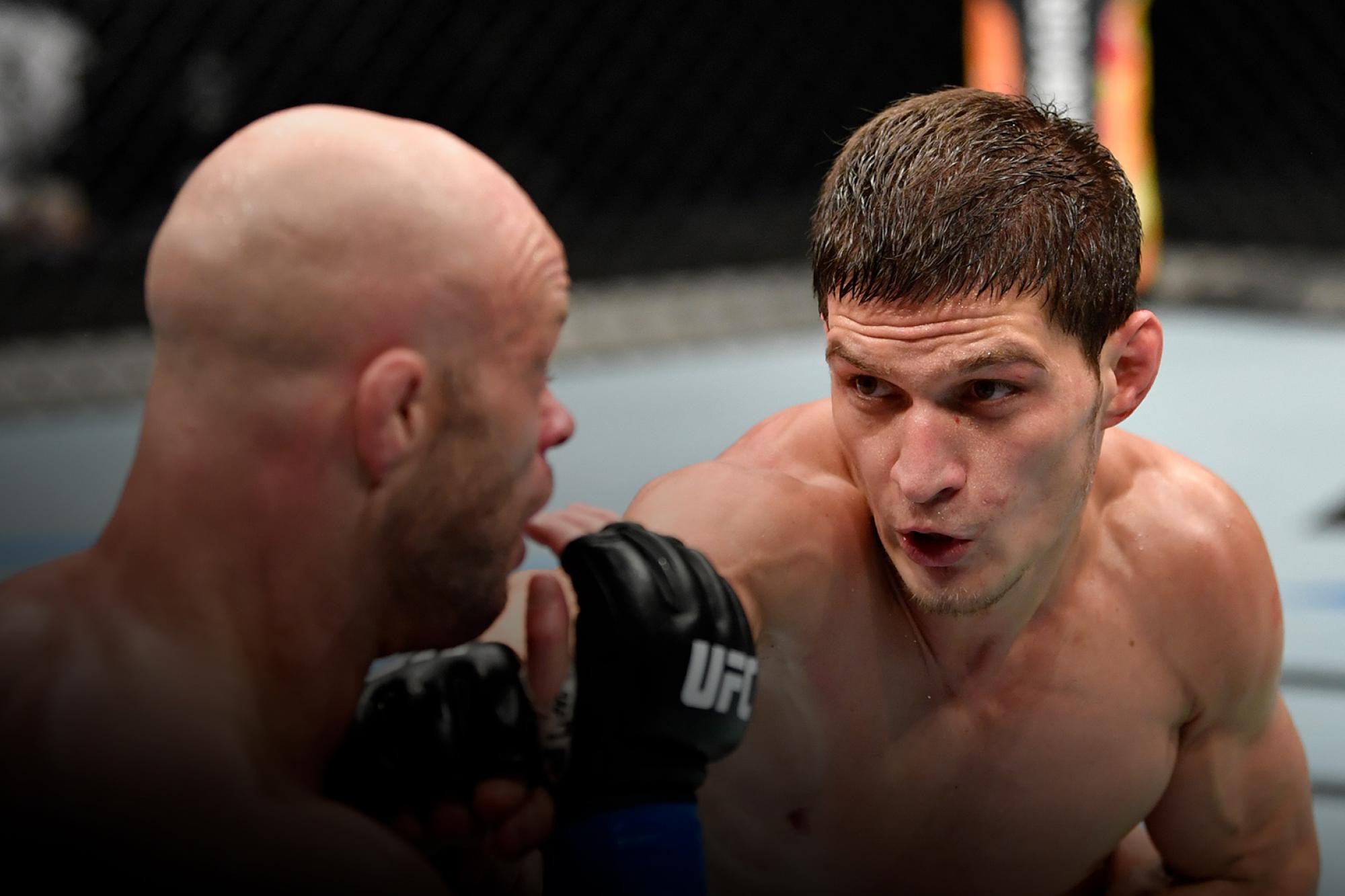 Fighters On The Rise: December 5 Edition

If years were graded like term papers and exams, 2020 would certainly get an F-minus, which is a real thing. I know because there is one on my university transcript, but that’s a story for somewhere else. 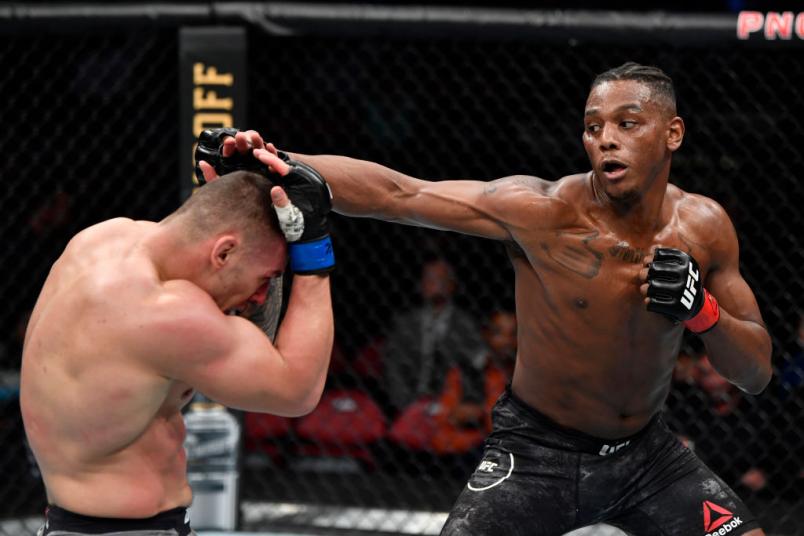 Saturday night in Las Vegas, Hill looks to close out a perfect rookie campaign with the biggest victory of his promising career as he squares off with light heavyweight stalwart Ovince Saint Preux in a bout that should illustrate where “Sweet Dreams” stands in the division heading into next year.

The 29-year-old earned a UFC contract last summer with a second-round stoppage win over Alexander Poppeck that pushed his record to 6-0 overall. He made his first trek into the Octagon in January, securing a unanimous decision win over Darko Stosic, and followed it up with a punishing first-round finish of Klidson Abreu in under two minutes to earn a place on the list of top breakout performers from the first half of the year. Although the result was later deemed a no contest after Hill tested positive for cannabis in his post-fight screening, the performance was no less impressive.

Now Hill takes a considerable step up in competition to face Saint Preux, a veteran who has faced a who’s who in the light heavyweight division over his 22-fight UFC career. Heading into this one, OSP serves as the dangerous, experienced fighter emerging hopefuls are measured against.

In his last two light heavyweight outings, Saint Preux has dispatched Michal Oleksiejczuk and Alonzo Menifield, up-and-comers in a similar position to Hill when they ventured into the cage with the veteran. Now, it’s the Contender Series graduate’s turn to share the Octagon with the seasoned Saint Preux and see if he can succeed where the last two upstarts failed. 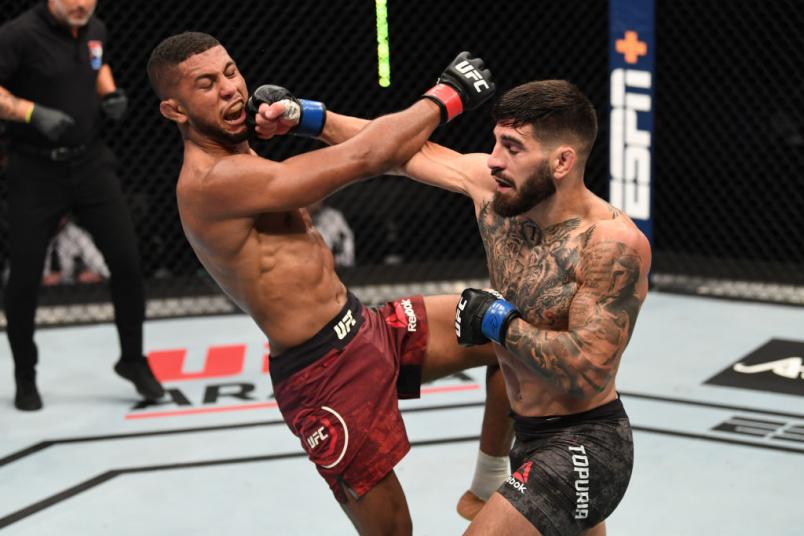 Back on October 10, Topuria did what every fighter paired off with a promising rising star hopes to do when he stole some of Youssef Zalal’s thunder by registering a unanimous decision victory over “The Moroccan Devil” in his promotional debut. This weekend, all eyes should be on the undefeated 23-year-old as he makes his sophomore appearance in the Octagon against dangerous veteran Damon Jackson.

Topuria pushed his record to 9-0 with his win over Zalal and instantly established himself as someone to keep tabs on in the hyper-competitive 145-pound weight class. A black belt in Brazilian jiu-jitsu, Topuria previously challenged for the Cage Warriors bantamweight title, but missed weight and therefore left empty handed following his 99-second submission win over Brian Bouland.

Saturday’s fight with Jackson is a chance to take another step forward in the talent-rich featherweight division and add another quality win to his resume before the end of the year.

A championship fixture on the regional circuit between his prior to and between his UFC appearances, Jackson returned to the promotion in September, registering a come-from-behind submission win over Mirsad Bektic. With 18 career victories and 22 appearances, “The Leech” is easily the most experienced and accomplished opponent Topuria has faced thus far, and how things play out should provide a clearer indication of where the UFC sophomore fits in the division heading into next year.

If Topuria can out-grapple Jackson and push his perfect start to his career into double digits, he’ll enter 2021 as one of the top young threats in the featherweight division. 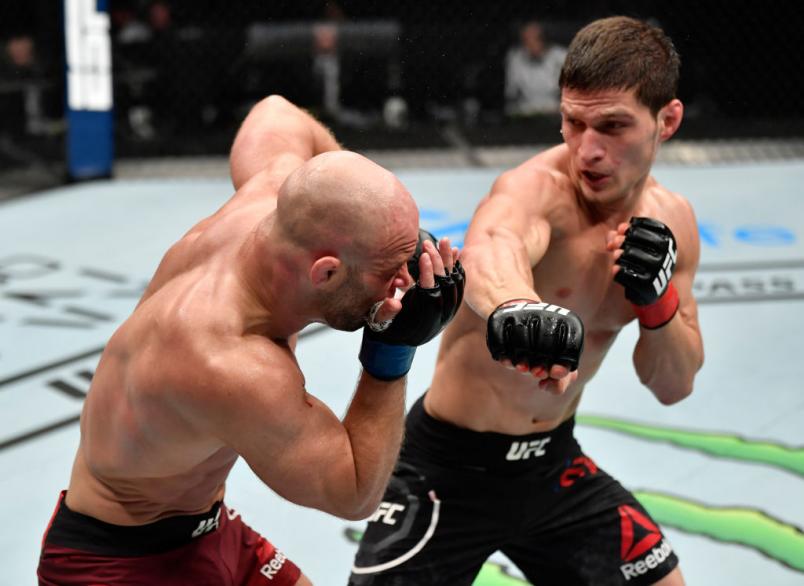 Evloev is one of the people already on that list of elite emerging threats in the 145-pound weight class, as the 26-year-old Russian is 13-0 and enters this weekend’s fight card looking for a fourth straight UFC victory when he takes on fellow former M-1 Challenge titleholder Nate Landwehr.

A motorcycle accident early in the year pushed Evloev’s season debut back to July, but when he did finally step into the cage, he showed why so many people are high on his potential by securing a unanimous decision victory over dangerous British grappler Mike Grundy.

Evloev is part of the generation of upstarts that is extremely well-rounded in the cage, boasting clean, technical striking, excellent grappling, and strong conditioning, making him a handful to deal with wherever the fight takes place. He’s already made the smart decision to move up in weight after beginning his career competing at bantamweight, and he should only continue to improve as he enters his athletic prime and continues to gain experience against high level competition.

This bout with Landwehr should be a good measuring stick of where Evloev stands at the moment as the 32-year-old Tennessee native is an unrelenting, aggressive fighter who is happy to take one to land one, trusting that his chin will hold up and his shots will do more damage. Thus far, Evloev has been able to dictate the terms of engagement in each of his first three UFC starts, but Landwehr may have different ideas, which will force the promising Russian prospect to show he can make adjustments and deal with a pressure fighter bringing the fight to him.

Should he come away from his North American debut with his unbeaten record intact, it will be difficult to deny Evloev a chance to face a Top 15 opponent when his 2021 campaign gets underway.