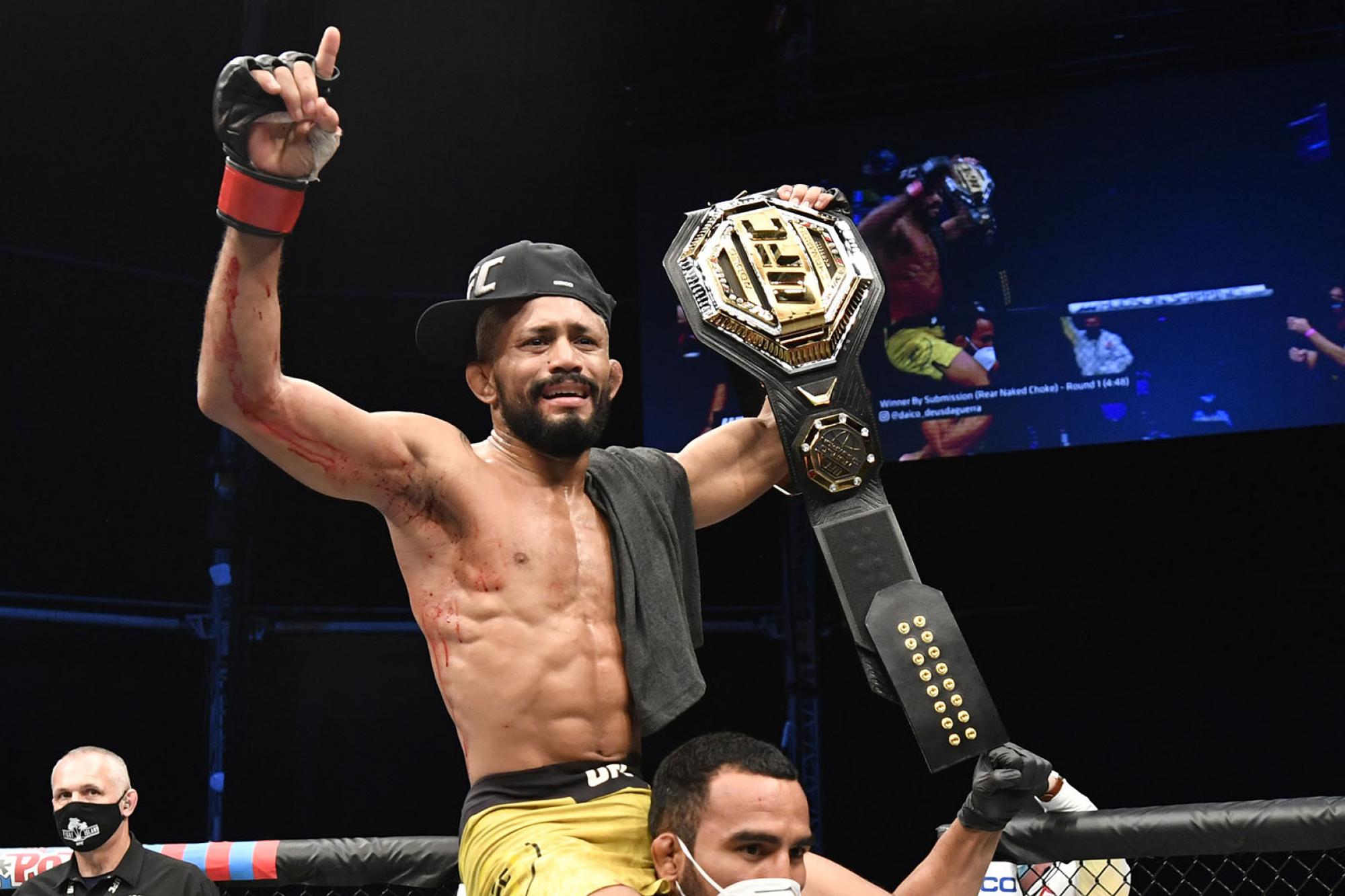 Veteran Flyweight Took The Long Path To The Title, And Now He's Settling In
By E. Spencer Kyte, on Twitter @SpencerKyte • Nov. 20, 2020

Ahead of his February encounter with Joseph Benavidez for the vacant UFC flyweight title, Deiveson Figueiredo spoke passionately about what it would mean for him to bring championship gold back to Soure, the relatively small town in the northern state of Para that he calls home.

“People need to understand I grew up on a farm, not in the city,” he said at the time. “I want to make everybody in the city, the country, and the world proud. If a guy from a farm in the north of the country can make it, anybody can make it.”

Though he earned a victory in the Octagon, Figueiredo lost the battle with the scale the morning before the fight, which made him ineligible to claim the vacant flyweight strap and meant he returned home empty-handed.

Additionally, the fight was defined by an accidental clash of heads between the two competitors early in the second round, one that left Benavidez with a sizable, bleeding cut along his hairline. With the veteran dazed and pawing at the leaking gash, Figueiredo closed the distance and finished the fight, dropping Benavidez with a right hand close to the fence.

Between the miscue on the scale and the clash of heads, nothing felt settled, so the UFC booked an immediate rematch between the two elite flyweights for July and, this time, there was no uncertainty.

Figueiredo made weight without issue, then steamrolled Benavidez in their second encounter, showcasing his superior speed and punching power, dropping the veteran with the first clean shot he landed. While Benavidez survived the Brazilian’s first attempt to finish the fight, the sequence repeated itself in the final minute of the opening round, and this time, Figueiredo would not be denied, as he sealed his victory with a deep rear naked choke that put Benavidez to sleep.

One hundred and forty days after their first meeting, Figueiredo accomplished what he’d set out to do in February, and soon after, he was able to bring the UFC flyweight title home.

“It was something that made me very happy; that made my family and my team very happy,” the newly minted UFC champion said through a translator when asked about finally getting to celebrate a championship victory. “I felt a sense of accomplishment — this was something I really wanted and had waited for — so it was gratifying to bring the belt to my gym and to the state of Para.

MORE UFC 255: Fight By Fight Preview | How To Order | Brandon Moreno | Every Finish By Shogun Rua | Embedded | Rise Of Alex Perez | Countdown | Fighters On The Rise | Free Fight: Shevchenko vs Chookagian | Inside The Octagon

“A lot of people are inspired by me — people who live far away (from the city), people from underprivileged communities — so I always try to say that you just have to go after what you want and have faith and you will be able to make your dreams come true.

“I was able to show everybody that nothing is impossible.”

This weekend, Figueiredo begins the next chapter of his career, defending his flyweight title for the first time against Alex Perez in the main event of UFC 255.

Initially scheduled to face former bantamweight titleholder Cody Garbrandt, the streaking Perez was elevated into the headlining pairing when “No Love” was forced out of the contest due to a torn biceps, and though the two have very different styles, the champion said nothing changed during his training camp.

“I didn’t change anything,” said Figueiredo, who made a shift to more of a boxing-style training camp focused expressly on his preparations ahead of his first meeting with Benavidez in February and has maintained the approach since. “The training is the same for Cody Garbrandt as it is for Alex Perez because I’m focused on speed and timing.”

Just as nothing changed in his training camp following the shift in opponents, the same is true about Figueiredo’s approach to his career now that he’s reached the flyweight summit.

Winning a championship can alter the way an athlete prepares or prompt a shift in focus, having already reached the rarified air countless dream to breathe, but very few ever do. Fame and celebrity eat away at preparation time, and setting new goals that generate as much drive can become challenging once the ultimate goal is accomplished.

But for Figueiredo, who joins a storied line of Brazilian titleholders in the UFC and stands as one of two current champions from the country considered one of the birthplaces of this sport, the goal today is the same as it was prior to each of his last several fights — to keep getting better.

“I feel real happy to be part of the list, not only the list of Brazilians, but the list of all UFC champions because now I understand how wonderful it is to win a UFC title,” said Figueiredo, who is just the third man to carry the UFC flyweight title and the lone Brazilian male to wear UFC gold at the moment.

“But nothing has changed in terms of my mentality; I’m the same as I was before,” he added. “I just want to keep changing the way I fight. I want to become faster, more versatile. If I can do that, I will continue to confuse opponents who think they’re entering the Octagon with the guy they saw compete the last time.”

In addition to continuing to work on his own craft, it is clear that Figueiredo has also been doing some advanced scouting of the man he’ll face on Saturday night.

Perez arrives in Las Vegas with a 6-1 record inside the Octagon; his lone loss sandwiched between tandem three-fight winning streaks. The first graduate of Dana White’s Contender Series to challenge for championship gold, the Team Oyama representative has looked outstanding since his loss to Benavidez nearly two years ago, entering Saturday’s main event having earned first-round finishes and Performance of the Night bonuses in each of his prior 2020 appearances.

After submitting Jordan Espinosa in January, the 28-year-old challenger dominated Brazilian veteran Jussier Formiga in June, chopping down the perennial contender with a series of punishing low kicks that rendered him unable to continue.

While the champion was impressed with his adjustments after an uneven performance against Benavidez, he’s confident things will go his way on Saturday evening in Las Vegas.

“In the fight against Benavidez, Perez didn’t do what he normally does; he left a lot to be desired,” Figueiredo said, offering his analysis of his opponent’s efforts in his lone UFC loss to date. “Against Formiga, he was better — he was more himself — but he’s a striker, so nothing he does really worries me.

Order UFC 255 For Any Device

“He’ll try to exchange with me and then we’ll try to take the fight to the ground, and I’ll finish him,” he added calmly when asked how he sees this weekend’s main event playing out.

After a longer-than-expected path to claim the UFC flyweight title and bring it home to celebrate with family and friends, the 32-year-old champion who wanted to show the people of Soure and the state of Para that anything is possible has no intentions of relinquishing the belt any time soon.

“I will retire with the belt.”