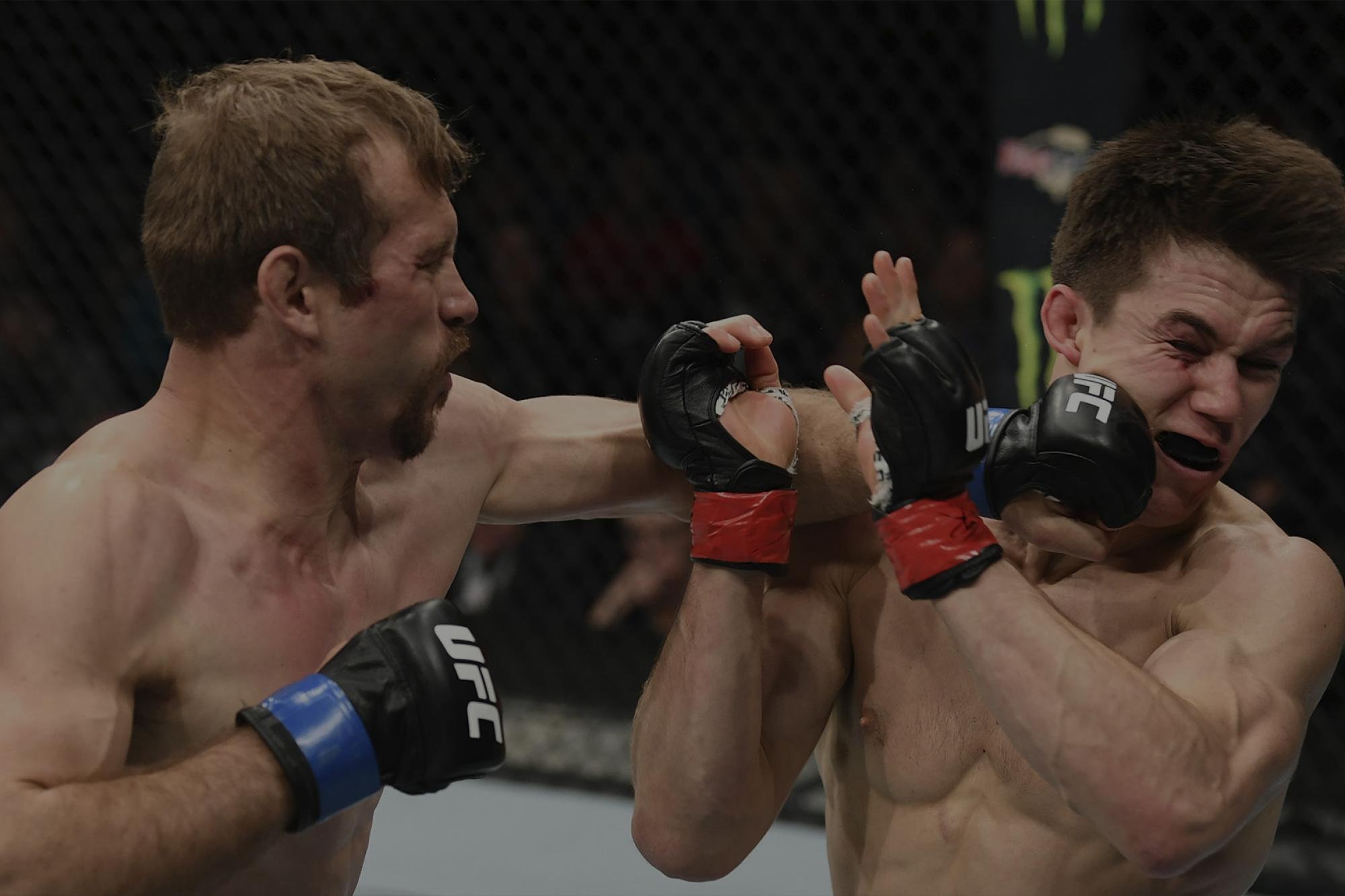 Recap all the action from the UFC Brooklyn ESPN prelims
By Thomas Gerbasi • Jan. 19, 2019

Donald “Cowboy” Cerrone made a spectacular return to the lightweight division Saturday night at Barclays Center in Brooklyn, halting rising star Alexander Hernandez in the second round of their UFC Fight Night preliminary bout.

Hernandez jarred Cerrone with a left hand in the early going, but Cerrone responded with a pair of takedowns. Hernandez didn’t stay grounded for long, and he went back on the attack on the feet. Cerrone willingly exchanged with his foe, the pace frenetic, and soon both fighters were marked up. As the round progressed, Cerrone began to land almost at will, his combinations bloodying the Texan.

Cerrone kept the pressure on Hernandez in round two, with knees and kicks to the body followed up by punches upstairs. Even at close range, Cerrone was dominating with knees and short elbows, but Hernandez was hanging tough under the assault. With 90 seconds remaining, though, a right kick to the head dropped Hernandez, and after a follow-up barrage, referee Todd Anderson had seen enough, stopping the fight at 3:43 of the second round. 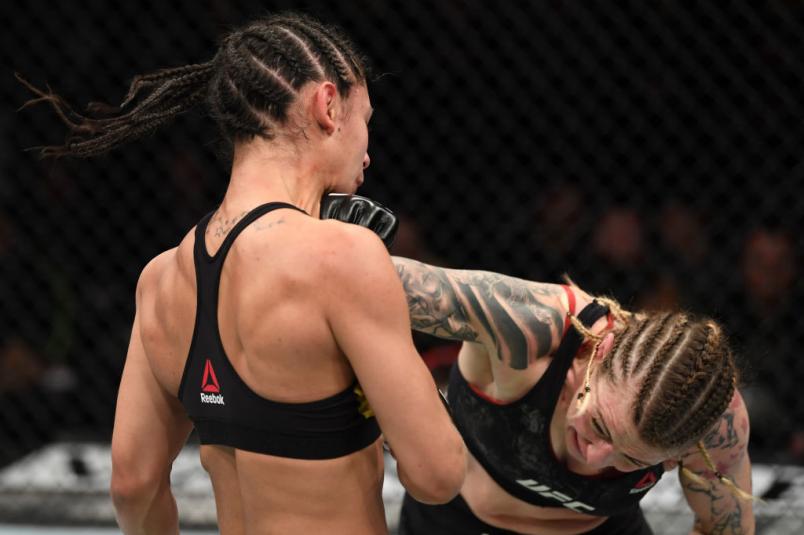 NEW YORK, NY - JANUARY 19: (R-L) Joanne Calderwood of Scotland punches Ariane Lipski of Brazil in their women's flyweight bout during the UFC Fight Night event at the Barclays Center on January 19, 2019 in the Brooklyn borough of New York City. (Photo by

Lipski went after Calderwood as soon as the fight began, with a clinch being the result. After some jostling at close range, the two broke, only to see Calderwood score the takedown and get the fight to the mat. Calderwood smoothly took her opponent’s back and nearly secured a choke, but Lipski got free. Calderwood wasn’t deterred, though, and she kept working, eventually taking the back a second time. Lipski got free again, but almost got caught in an armbar before the horn intervened.

Able to keep it standing in the second, Lipski was able to get her striking game in gear, but after the rough first round, the steam had gone from her strikes. Calderwood was content to counterpunch, an effective strategy, until ending the round with more solid clinch work.

Lipski was able to throw Calderwood to the mat two minutes into the final round, but again, it was the Scotland native doing the most effective work on the ground, as she worked for an armbar that nearly caught the Brazilian.

In a light heavyweight clash of Contender Series alumni making their first trip to the Octagon, Alonzo Menifield scored a first-round stoppage of Vinicius Moreira.

Menifield went on the attack immediately, knocking Moreira down seconds into the bout. Unhurt, Moreira looked for a submission off his back, prompting Menifield to back up and get the fight upright again. Once standing, Menifield kept throwing bombs, but Moreira was taking them well, and with three minutes left, he was able to lock Menifield against the fence. Menifield ultimately got free, and this time he scored a knockdown with a right hand and didn’t let Moreira off the hook, with a follow up attack of ground strikes bringing in referee Dan Miragliotta to stop the fight at 3:56 of the opening round.

With the win, Dallas’ Menifield improves to 8-0. Brasilia’s Moreira falls to 9-2.

Now 3-0 with three finishes in the UFC, bantamweight Cory Sandhagen continued to bring the excitement, as he submitted previously unbeaten newcomer Mario Bautista in the first round.

Both 135-pounders got down to business immediately, but Sandhagen broke open a close fight two minutes in when he scored with a flying knee that dropped Bautista. The Arizonan recovered and slammed Sandhagen to the mat, but he wound up in a reverse triangle choke. Bautista escaped, but Sandhagen kept the subs coming, moving from a kimura to the armbar that ended the bout at 3:31 of the opening stanza.

Colorado’s Sandhagen moves to 10-1 with the win. Bautista, who replaced the injured John Lineker, falls to 6-1.

Watch Dennis Bermudez give his retirement speech after defeating Te Edwards in Bermudez' final fight in the Octagon.

Long Island’s Dennis Bermudez made his final fight a memorable one, as he scored a three-round unanimous decision over Te Edwards and then announced his retirement following the bout.

“I’ve been through some stuff and I thought about hanging up the gloves after those four losses in a row,” said Bermudez, a former Ultimate Fighter finalist and longtime featherweight contender who returned to 155 pounds for his last bout. “I want my kids to look back on this, and even though I went through adversity, I finished on top.”

Edwards started off strong, avoiding Bermudez’ takedown attempts while landing well with his strikes. But in the final minute, Bermudez got the fight to the mat and landed some hard shots until the horn sounded.

Bermudez got the fight back to the mat early in the second as he dodged a guillotine attempt by Edwards, and he went to work on his foe’s left arm. Edwards got loose and rose to his feet, landing a hard elbow in the process. With a minute left, Bermudez scored with another takedown, again finishing strong with his ground strikes.

In the third, Bermudez kept the momentum going, nearly finishing Edwards with a choke, and while the Arizonan got loose, “The Menace” kept the heat on until Edwards got back to his feet. It was a short-lived moment upright for Edwards, who got put back on the deck in the final minute of the bout.

Neal was the epitome of poise in the first round, as he patiently walked Muhammad down while landing accurate strikes whenever an opening presented itself. Add in stellar takedown defense and it was a good frame for the Texan.

The bloodied Muhammad got a little more aggressive in the second, only to get greeted by hard counterpunches from Neal. Muhammad’s steady body work was starting to get Neal’s attention, and even though he still couldn’t get the fight to the mat, he was letting his foe know that he was still there.

In the third, Neal’s continuous use of his left hand paid dividends, as he dropped Muhammad with three minutes remaining. The gutsy Muhammad recovered and got back to his feet, only to get dropped with a head kick with a little over a minute left. Again, Muhammad rose and got back into the battle, making it to the final horn.

In the welterweight opener, Chance Rencountre broke into the UFC win column for the first time, submitting Kyle Stewart in the first round.

After an inadvertent low blow by Stewart stopped the action seconds into the bout, Rencountre got to work, taking Stewart to the mat. The Arizonan rose to his feet immediately, but Rencountre stayed locked on to him, and when the fight went back to the mat, it was with the Oklahoman sinking in a rear naked choke that forced Stewart to tap out at 2:25 of the opening frame.

With the win, Rencountre moves to 13-3. Stewart, who replaced the injured Randy Brown, falls to 11-2.