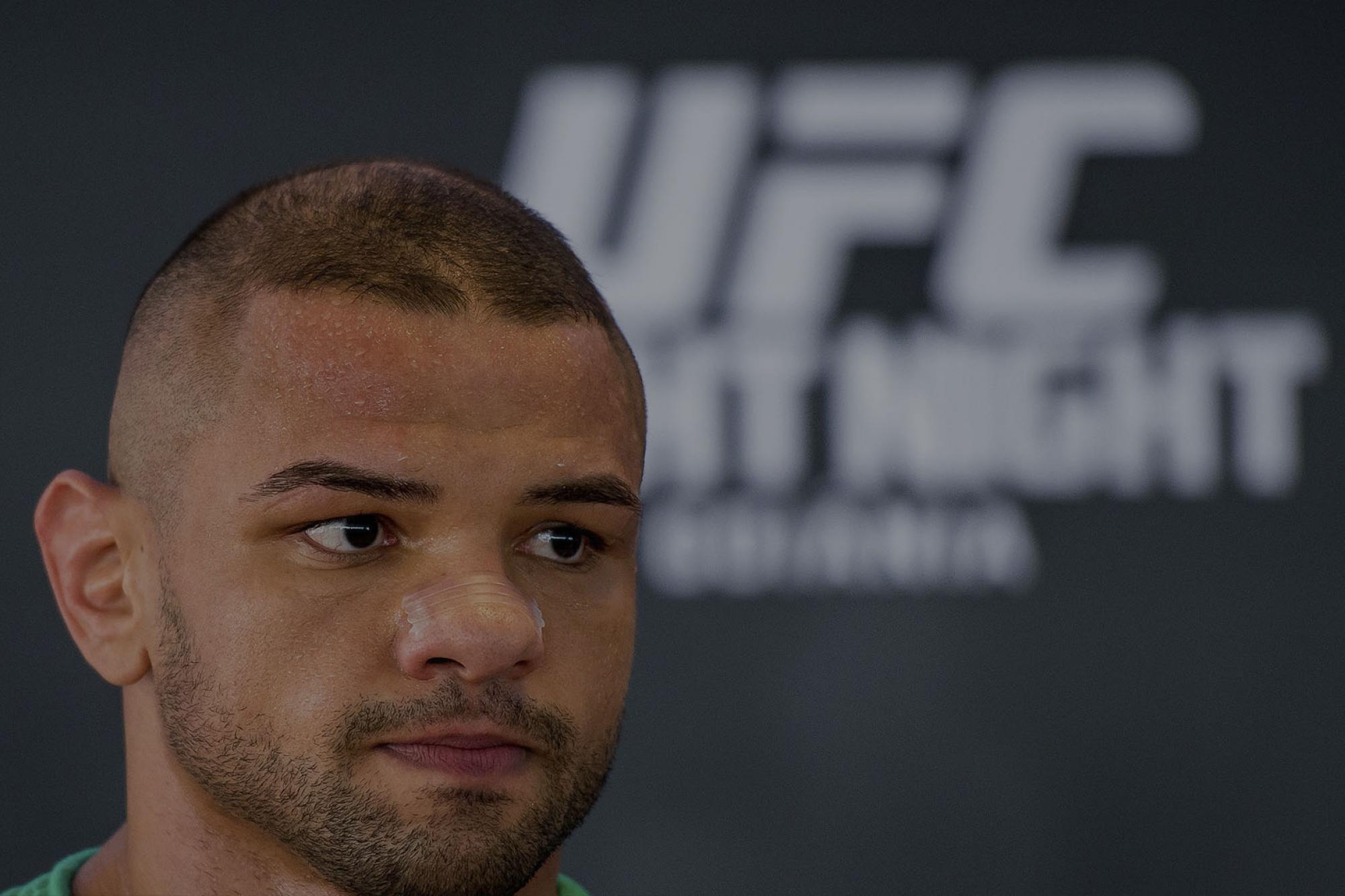 That night — June 30, 2001 — a 17-year-old Alves stepped into the cage with future teammate and UFC staple Gleison Tibau, who emerged with a second-round submission win.

This weekend, 18 years and 39 fights later, the now 35-year-old UFC welterweight will once again compete at home when he squares off with Max Griffin. 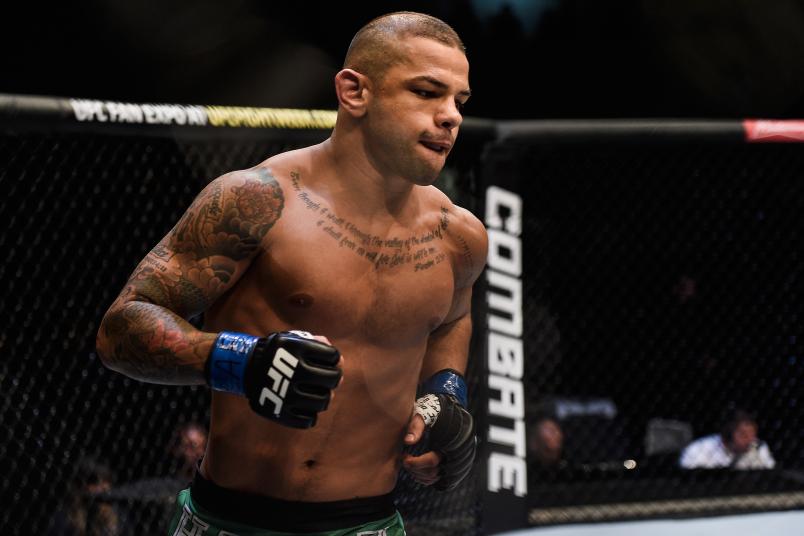 GOIANIA, BRAZIL - MAY 30: Thiago Alves of Brazil enters the arena prior to his welterweight UFC bout against Carlos Condit of the United States during the UFC Fight Night event at Arena Goiania on May 30, 2015 in Goiania, Brazil. (Photo by Buda Mendes/Zuf

“It’s pretty special,” Alves said of the opportunity to compete in his hometown on Saturday evening. “When I left Brazil, I was 19 years old and MMA wasn’t nearly what it is today. You couldn’t make a living being an MMA fighter in Brazil, which is one of the reasons I moved to Florida and joined American Top Team; it was because it was a great opportunity.

“Now, 16 years after, to be able to come back on the big stage, even though this is not the best time of my career, I’m super-excited. I feel great. I’m going to go out there, fight my heart out and get this victory. I know without a doubt I’m going to get a victory this time.”

Once a fixture the welterweight title picture, the last several years have been challenging for Alves. He lost two years to a series of injuries and after winning his first two appearances following the hiatus, the former title challenger has dropped four of his last five.

After earning a victory over fellow veteran Patrick Cote in his lone appearance of 2017, Alves was stopped by promotional newcomer Curtis Millender in his first start of 2018 before venturing to Moscow to take on undefeated UFC debutant Aleksei Kunchenko.

“I knew that I needed to put myself in a position where I really had to bring the best out of myself — to see if I still have it; to see if I can still compete at this level — and I had all the questions answered in that fight,” said Alves, who landed on the wrong side of a unanimous decision result in September.

“I think I dominated the whole fight until the last minute-and-a-half in the last round where he caught my kick. I fell down and was playing defense when he was attacking. I didn’t take any damage. If you’re going to look at the fight as a whole, I think I won that fight, but going against an undefeated Russian in Moscow, trying to get a decision is almost impossible.”

While the result wasn’t the one he was hoping for, Alves was happy with every other aspect of his preparation and performance and uses that bigger picture approach to remind himself that the outcome isn’t the only thing that matters and this professional rough patch is only one piece of a much larger, happy life. 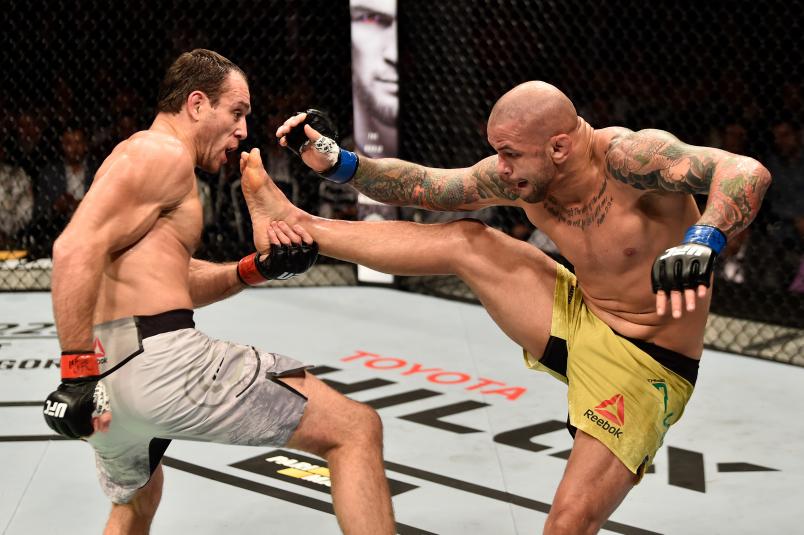 MOSCOW, RUSSIA - SEPTEMBER 15: (L-R) Alexey Kunchenko of Russia catches the kick of Thiago Alves of Brazil in their welterweight bout during the UFC Fight Night event at Olimpiysky Arena on September 15, 2018 in Moscow, Russia. (Photo by Jeff Bottari/Zuff

“It’s just like life,” began Alves, who made his first trip into the Octagon more than a dozen years ago against Spencer “The King” Fisher. “You have to look at your career like life in general.

“You could be doing everything right and sometimes you’re not going to get the results you want, but are you making improvements? Are you getting better? You’re not getting the result that you worked so hard for, but is everything else around you working the way it should?

“For me, yes, it is,” he said. “Everything else around me is perfect; it’s just that I’m not getting that one little thing, which is the victory, and unfortunately, that’s just life. Overall, my life is great; I’m just not getting those results. Eventually, it’s going to come together. I know I’m talented enough, good enough — I know I’m as good as I’ve ever been — it’s just a matter of getting that last little thing.”

So while he’s struggled over his last five and there would be some incredible synergy about closing out his career in his hometown, where this lengthy adventure started, Alves has no intentions of leaving his gloves in the center of the Octagon and bidding the sport “Adieu” following his bout with Griffin on Saturday night.

“I just turned 35 years old in October and I feel great,” he said. “I see a lot of guys my age having success, competing and I think I’m as good as everyone else out there. I’m not getting that last little bit to come together, but I will because I’m working my ass off and the only way it’s going to come together is if I keep going out there and putting my ass on the line like I’ve been doing.

“I’m not done yet,” he added with a laugh. “I’ve still got a year or two of fighting in me before I figure it out. Thirty-five is still too early to hang it up.”

Alves knows that his decision will be difficult for some people to understand and highly scrutinized by others.

He’s 5-8 over his last 13 appearances, has endured at least 10 surgeries throughout his UFC career and there are very few competitors who have experienced a reversal of fortune this late in their careers, especially after such extended stretch of negative results.

Opting to walk away and doing so at home in Fortaleza, ideally after a victory, sounds like the best fairytale ending the life-long fighter could hope for at this point as far as most observers are likely concerned, but that’s just not how Alves is wired. 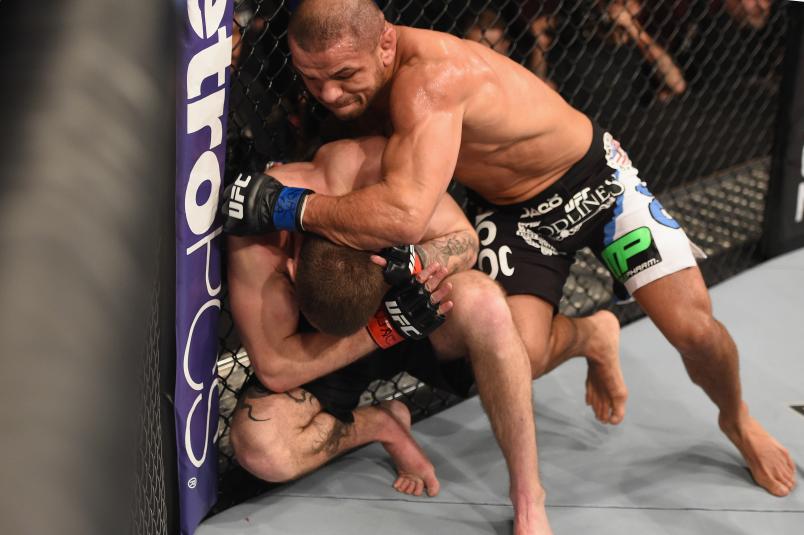 “I don’t expect everyone to understand how I think or how I do things,” he said. “I was always (cut) from a different cloth than everybody else. It’s hard for people to try to understand, especially when things get hard.

“I’ve made a lot of improvements and I’m ready to go out there and put it all together. I’m not doing it for anybody else — I’m doing it for myself and for my family. When my back is against the wall, all I know to do is move forward and keep swinging and that’s what I’m doing now.”

And that’s what he plans on doing for the duration of his bout with Griffin on Saturday night.

“Max is a real tough fighter,” Alves said of the man he’ll share the Octagon with this weekend. “He has a good gas tank, has a good output, but what I think is going to be the difference is my experience and my resiliency. I’m going to stay in his face the whole time and we’re going to scrap the whole time.

“He’s going to be locked in the cage with a m*****f***** that is hungry, pissed off and has a chip on his shoulder and I’m going to come after him with everything that I have.